Nextiva NextCon16 - Jumping Curves and Words of the Woz

It was a challenging week for analysts and consultants, with Nextiva's event overlapping with BroadSoft Connections, just down the road apiece in San Antonio. No complaints about being in Scottsdale, and while most UC&C watchers know BSFT, Nextiva isn't well known in our circles, and I'm happy to be one of the UC Experts in attendance to help tell that story. It's a story worth telling, but also serves as a model for many, many other players still in the voice business who want - and need - to evolve to something akin to UC&C.

There's too much ground to cover in this post, and I'm going to frame my takeaways about Nextiva around a few pertinent takeaways from the two headliners, Guy Kawasaki and Steve Wozniak. It's rare having two speakers of this stature at one event - there were other good ones as well - and this pairing was interesting in that they had conflicting views on a couple of topics.

I'll start first with Guy Kawasaki, who talked about his top 10 list from his latest book, Mastering the Art of Innovation. Here are three that capture a lot of what I want to share here about Nextiva, and also what I think is relevant for our UCStrategies audience. 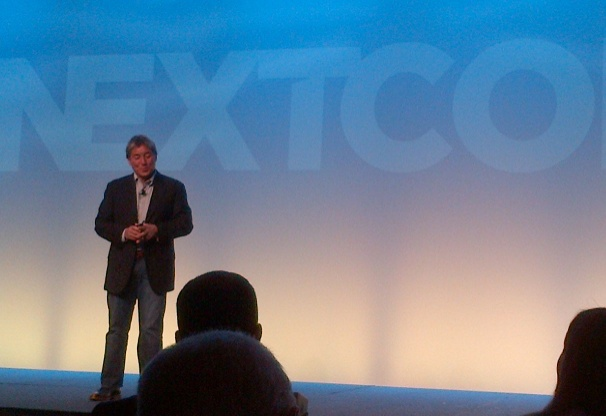 1. Jump to the Next Curve

This is a mantra Guy talks about all the time, and it's what all companies have to do for long-term success. However, in the context of his new book, it's about innovation, and it needs to be at game-changing scale. That's what getting to the next curve is about: "not doing things 10% better, but 10X better."

Known as a VoIP provider, this is exactly what Nextiva is focused on, especially with their NextOS platform which was announced at the conference. Nextiva has built a great business serving this market, but they know as well as anyone else that VoIP is a race to zero. UC&C as we know it isn't exactly where they want to get to with NextOS, but it's in the ballpark.

We heard a strong vision from Founder/CEO Tomas Gorny, so they know the problem set: companies are having a hard time following the customer journey, communications is a major problem, and there's complexity in business. Customer expectations are higher now, businesses have too many applications without any real integration, and they can't adapt - "business communications are in a state of crisis."

Tomas also knows that value isn't just about making communications better, but also to make businesses more proactive. To address that, his vision for NextOS is to address the future of work issues we hear so much about - knowledge management, automation, workflow automation, predictive modeling to anticipate outcomes, and mapping the customer journey. He doesn't speak in the UC&C terms we so often hear, but it's familiar enough that we know what he's getting at.

I would say that most UC&C players share a similar vision, but are in different places in terms of their ability to execute. For Nextiva, however, while it's clear which curve they're jumping from, it's less clear what curve they're jumping to. They're not alone, especially with UC being such a moving target. For their vision to work - and for their curve jumping to succeed - they'll want customers to entrust Nextiva with all their communications needs. Equally important, they need to get their partners onside to sell and support this brave new world.

That may satisfy Guy's 10X improvement to truly be innovative, but it remains to be seen how ready the market is. Tomas indicated there's been a strong reception so far, but we don't really know what that means or if it's enough validation to more clearly define what this new curve actually is. Worrisome as that may sound, Guy will tell you otherwise, as we move to my second takeaway from his talk.

To tie this narrative together, I'll state that Steve Wozniak would later tell us otherwise, but Guy's view is that if it's better than what's out there now, just get it out there - you can refine it later. Things are moving too quickly today to wait until it's perfect. You'll never get there anyway, and it's more important to get to the next curve - before everyone else - than wait until it's just right. Oh, and as he often said, "take the money." Mistakes can be fixed later, but unless revenues are coming in, there may not be a later. He knows of what he speaks.

My sense is that's what Nextiva is doing with NextOS. We heard Tomas talk about machine learning, NLP, rules engines to automate processes, gamification to engage younger employees, and real-time analytics. I have no doubt they can do these things, but the examples shown were fairly basic and telephony-centric - nothing we haven't seen before. That said, Tomas has a strong vision for NextOS, along with a will to make it happen, and based on his business track record, I wouldn't bet against him.

However, to be fair, their sweet spot is VoIP customers using 20-50 lines, and many are much smaller. It remains to be seen how willing and able they'll be to go along with Nextiva on this journey. They clearly have a strong culture, great customer support and a strong sales organization, but a lot of customer education will be needed to move them past VoIP to contact center, analytics, workflow automation, etc. There's more of a natural fit here for enterprises in terms of the needs NextOS is addressing, but at present that isn't Nextiva's focus.

3. Don't Let the Bozos Grind you Down

This has always been my favorite takeaway any time I've seen Guy speak, and it applies to Nextiva in spades. It's hard to argue with Guy: "rich and famous people aren't always right; they're more lucky than smart." While this may apply more to startups, Nextiva is still a young company, and Tomas has proven to be a very savvy leader who knows how to steer clear of bad advice.

Leadership aside, being based in Phoenix is another key to their success. Silicon Valley isn't far away, but it's far enough that Nextiva hasn't fallen under the spell of the money culture that produces a lot of unicorns but also a lot of flameouts. They have flown under the radar being there, and that's really helped nurture a strong culture and stay on a steady course that Steve Wozniak wishes more companies would do.

Of course, it helps to be private, so there are no quarterly earnings calls to grind you down, or pressure from investors to make acquisitions or exits. If any of this comes as a surprise, the tone was set at the very start of NextCon16 by CMO Yaniv Masjedi: "great tech companies can start anywhere, not just Silicon Valley." Simple and elegant statement - something that I'm sure would make Steve Wozniak smile.

As for the bozos, I can assure you that my reservations here about Nextiva will not grind them down. I'm just being objective and balanced, and it's hard to argue with their success to date. The future may be less certain, but I sure like the foundation they've created. 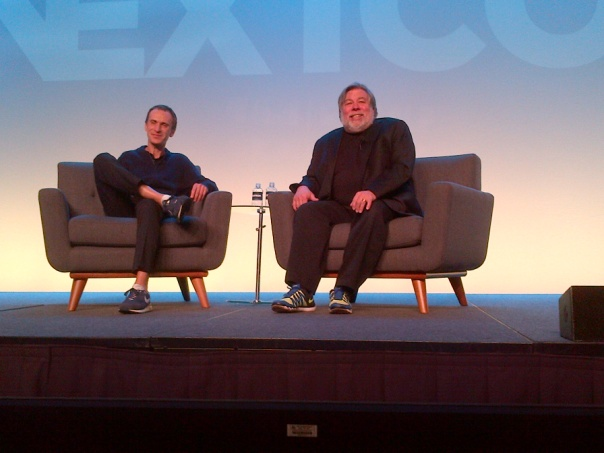 Words of the Woz

There's something Yoda-like about Steve Wozniak, and the audience was clearly in awe the whole time he was on stage. I'm the first to rag on about how the Web and mobility have reduced our attention spans to nothing, but we all know it's a learned behavior. Nobody had any problem giving Woz their undivided human-to-human attention for an hour and it's nice to see that the machines haven't won - at least yet.

This post is running long, and there's so much to talk about. I'll just share a couple of things here that reflect well on Nextiva - the product and then the company.

"If you care about elegance and simplicity, you get great products."

Great quote from Steve Wozniak, and that's really all you need to know as to why Apple's products were so successful. You can only apply this so far with VoIP, but my overall impression is that Nextiva applies this philosophy to NextOS, at least in terms of what they believe the market needs. Perhaps the market doesn't quite know it yet, but if NextOS helps them "build amazing" as Tomas stated, his vision will be proven right.

His goal is easy to understand - "simplify business communications" - but if it was so easy to do, the Avayas, Ciscos and Microsofts of the world would have figured it out by now. Nextiva is glad they haven't, and if they can embody Apple's design mojo, anything is possible.

"My goal wasn't to make a ton of money. It was to build good computers."

Talk about simple and elegant. He says this so earnestly that you might think he's the last honest man from the Valley. Maybe he is, and it was great hearing him talk about the early days of building PCs in the garage and spending down time with Steve Jobs hunting for Dylan bootlegs in local vinyl shops. Making big money was not the end game, just like the Rolling Stones never thought they'd be playing music beyond their 20s.

Tomas talks along the same lines with Nextiva, saying he "just wants to build a great company." There's no magic formula for doing that, but it starts from the top and the culture you create. After spending a few days with their team, there's no doubt they've done that, and after spending time with their partners and customers, they seem to feel that way, too. There's always a happy vibe at these events, but it feels real. During the whole time Tomas was keeping the fireside chat going with the Woz, you got the feeling that Steve Wozniak really liked what he saw.

Also on UCStrategies.com on this topic:

Communications Enabled IoT: Shifting the Focus from Tools to Solutions