RingCentral announced today a new set of APIs and an SDK to enable ISV partners, VAR partners, and even end users to interface to the platform for a variety of new capabilities. This new platform is called the "RingCentral Connect Platform." While reminiscent of platforms like Avaya ACE, there are some critical differences about the RingCentral offer that may make it very interesting and may change the market.

First, as RingCentral is a pure cloud play for communications, it is very easy (and relatively low cost) to open the APIs up to customers and partners. Where a premise system typically required buying additional servers and worrying about deployment and redundancy/availability, all that is required to use the RingCentral APIs is an Internet connection to the RingCentral cloud. Security is managed through tokens and the interfaces are all RESTful and provide easy web services-based integrations.

As shown in the figure, the API is intended to provide access to a variety of capabilities of the underlying architecture. The fact that both analytics and business rules are included enables a range of new capabilities. For example, Brighton Cromwell, a federal defense supply chain contractor, has developed a reporting system to manage compliance through the interface. What is clear is that there is a range of capabilities here that will enable the partners and customers that decide to use the RingCentral Connect Platform to innovate and create value for themselves and their customers. 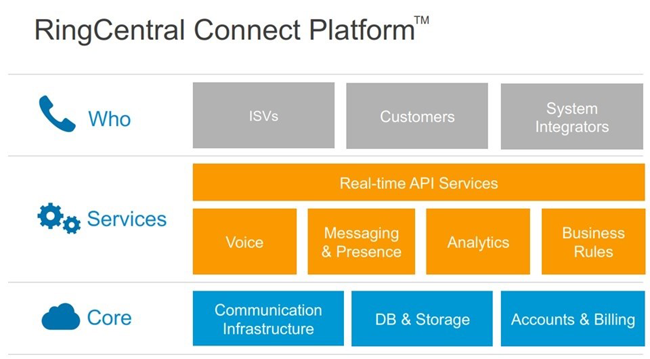 In fact, RingCentral sees a number of other use cases: Screen pops in CRM, Custom Dashboards, Custom Business Rules, Tagging of Real-time events, Billing enhancements, Agent Dispatch using SMS, Provisioning, and a variety of custom workflows. While most integration of communications apps to major IT apps like Salesforce have involved the communications vendor writing to the IT app vendor APIs, RingCentral is attempting to get IT vendors to write to its API. An example of this is the CRM vendor ZOHO, who has developed to the RingCentral APIs for the integration of their CRM with the communications platform. For smaller IT app vendors, RingCentral may offer a rapid way to expose their solutions to a wide SMB base.

At this point, the API and service are available on an application/approval Beta version. While RingCentral says that there are more requests than they can handle, a key question is whether RingCentral has the market scale to attract a range of partners to use the Connect Platform. In that vein, RingCentral has shown significant growth. In 2014 their cloud communications subscription revenue increased by 57% to $170M. Assuming an annual revenue per subscriber seat of about $300 (based on $25 per month for basic service, multiple services per sub and discounting), RingCentral has somewhere between 550K and 600K subscribers today. Even with such strong growth, they are still a small part of the installed SMB base. If we assume that the SMB installed base is in the U.S. is about 25-30 million seats/users/ports and the annual transition churn is around 5-10%, the result is a range of 1.25-3 million new seats/users/ports installed annually. While the 600K subs is still a small percentage (around 5% of the installed base), a 50% growth rate of 300K seats in 2015 would be 10-25% of the new seats deployed. RingCentral does not publish subscriber numbers, so the above are all conjecture.

While RingCentral did not commit to either a time or pricing for the Connect Platform, my expectations is that it will be both widely available as well as moderately to no significant charge. Customer acquisition and churn remain major challenges in the cloud communications space. Having a wide set of partners using the API can help address both issues: for acquisition, customers may be encouraged to use the RingCentral platform as it integrates well with a strategic IT software systems used to run the business, and the API integration may help reduce churn by delivering differentiation and stickiness. Both may be key to maintaining a profitable business model in the face of pricing pressure that is building in the cloud communications market. Another option is to have an app/capability store to enable partners to offer enhancements to the RingCentral services offer through the company web site, enabling RingCentral to monetize these add-ons.

The major news from this announcement is that the cloud is both maturing and focusing on the next level of value above basic services. While the initial version of cloud communications services often were generally Least Common Denominator capabilities with little differentiation, it is becoming increasingly clear that differentiation, customer stickiness and new paths to customer adoption are required for success in a rapidly maturing and competitive market. RingCentral has put forward their path with the Connect Platform, it now remains to be seen how the other cloud communications vendors respond.