Baby boomers (aka the folks who still make most of the decisions) will recognize the title of this article as an adaptation of the late 70's hit song "Video Killed the Radio Star," but this time it is "video conferencing" that is in demise. I have seen a lot of commentary over the last year or so about video conferencing being "the new voice" and I have gone on record as saying that I agree: if you can have a video conversation as easily as you can a voice conversation, then you probably will (absent the "still in my pajamas" scenario). However, what sparked this article is the discovery of two things that I greatly prefer over commentary: specifically, data and analysis.

This week an article by Sean Williams on Motley Fool caught my eye, "Will Polycom Ever Find The Bottom?" Sean's message is that the video conference players (Polycom, Cisco, Radvision Logitech) have been significantly impacted by the shrinkage in IT spending since 2008; however, their stock is now fully discounted and the remaining three (Radvision having been bought by Avaya), stand to gain from any future upswing in the economy. Few will argue with that - but the title tells you that I am one of the few. 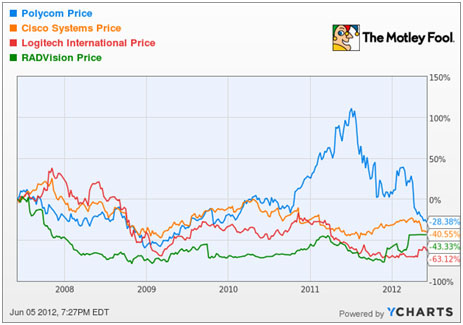 For a start, let's take a look at Sean's chart. The impact of the recession is clear to see, but the anomaly is the rally that Polycom stock experienced from late 2010 to mid-2011. I attribute that to the expectations created by the management team recruited by CEO Andrew Miller, who joined in May 2010; in particular, CTO/CSO Joe Burton, who joined in September 2010. However, by May 2011, Mr. Burton had departed for Plantronics and that was when the stock price started its rapid "return to earth." So were the investors betting on Mr. Burton, or were they initially betting for, and ultimately against, Polycom's efforts to transform itself from a video/voice conferencing vendor into a unified communications (UC) vendor? I contend the latter, since Polycom still needs partnerships with Cisco/Microsoft/Avaya/Siemens (etc.) to have credibility in the UC space. I have made the case before that it takes more than marketing spin to turn a silo system into a UC system; and since Mr. Burton was on the hook for the implementation, I will allow readers to drawn their own conclusions on the possible reasons for his early departure.

I have already said that I support the notion that video is (or will soon be) the new voice. However, where I disagree with Sean's analysis is whether the video conferencing players will experience a lift from an improving economy or be left behind by personal (a.k.a. "desktop") video. If there is one thing that everyone's favorite topic (i.e. smartphones/tablets/BYOD) tells us about video conferencing is that it no longer takes a dedicated, highly expensively built-out conference room to facilitate video conferencing: you can have a "good-enough" video conversation on a portable device that costs $600 or less. If the value proposition of video conferencing is saving money on business travel, is anyone going to spend $250-300k for a video conference suite or $10k for a dedicated video conference terminal?

The use case for video conferencing suites that potentially trumps personal/desktop video is the in-person, pre-scheduled meeting. However, although I have been an avid user of video communications for a number of years, I cannot recall being in a video conference suite that was communicating with another video conference suite. Overwhelmingly, the meeting room video gear has been used to include remote participants who are using desktop/personal video. Furthermore, I would argue that much of the value of pre-scheduled video conference meetings has been absorbed into the ad-hoc nature of presence-driven communications that is offered by a well-designed UC system. In a recent conversation with Kevin Isacks, Chief Development Officer of NET, he revealed that his new range of products (the UX Series) could not have been built without their UC system; which had facilitated an uncountable number of ad-hoc "quick question" type conversations that required not only voice/video but some degree of desktop sharing/ collaboration or a note-taking tool. I would argue that the "solve it now" approach is far more productive than the "thrash it out at the next team meeting" strategy.

If "good enough" video can be conducted on a portable device, then that will be the endpoint used in the roaming scenario (in fact, the only one available). In the fixed-location scenario, you can get greater utility from a UC system for barely more than the cost of the portable device and a fraction of the cost of video conference suite/terminal. The system I am writing this article on is a $600 generic (Intel i3) laptop that delivers HD audio/video conferencing by connecting to a 37" Vizio LCD screen ($580 two years ago, including HDMI cable) with a Microsoft Lifecam Studio 1080p HD camera ($50) and a ClearOne Chat 70 echo-cancelling "speaker phone" ($120). You can use a setup like this for Skype/public cloud IM; on-premises UC; cloud UC or cloud video (e.g. Vidyo or Blue Jeans). If you have the workspace set up correctly with respect to windows/lighting then every dollar spent more than my total price of $1,350 hits a very, very steep diminishing returns curve. Bottom line, HD video chat is now very cheap, with an almost zero marginal cost and you don't need a UC system to use it. However, if you add this "DIY video conference terminal" to a UC system you have all the presence, directory, collaboration and other tools that you need that don't necessarily come with a video conference system.

This leaves us with the question on whether UC is taking off or not? Once again, extensive commentary can be found for both sides of the argument. However, when I first started my UC Market Deployment Data exercise in August, 2011, I found only 18.9% of Fortune 500 companies showing evidence of UC deployment. That number had grown to 32.2% by March and it currently stands at 38.4%. Although the UC deployment rate is strongly correlated with organizational size, with the advent of cloud UC services, there is evidence of a strong deployment trend even among the SOHO segment.

So does the video conferencing industry have a future with or without an economic upturn? I think not, and it turns out that Melanie Turek of Frost and Sullivan made this case just a few days ago on NoJitter, so I know that I am not being a complete contrarian. The Avaya/Radvision and Cisco/Tandberg acquisitions illustrate that video only has a future as part of a UC platform. I predict that the video conference links between the remaining video conference vendors and the UC platform vendors who lack a solid video experience will be glowing red hot by the end of the year.