As the new Internet is emerging as a destination to clouds, UC is also rapidly migrating into the cloud as UC-as-a-Service (UCaaS), resulting in the delivery model between the user and the service becoming much more complex and difficult to manage. Think about today's typical on-premise enterprise deployment of UC and how much complexity there is just to deploy and manage mobile users using Bring Your Own Devices (BYODs) and laptops across the wireless network. Most on-premise UC real-time media deployments experience intermittent quality and reliability issues in which end-users sometimes find their day riddled with frustration as they just want to communicate and collaborate seamlessly with a remote set of colleagues or business partners.

In my prior article I wrote about how Skype for Business released a whole new framework in how to get an enterprise ready for the cloud. In that article I highlighted some challenges about UC deployments that are end-user device and/or network related that have nothing to do with the actual UC as an application. Now amplify the complexity as UC moves to the cloud using some intermediary set of networks, managed by multiple different providers to get to the UC service. Since it requires months of effort just to get an on-premise UC deployment running smoothly, with a large amount of highly skilled engineers to keep it tuned just right, what makes us think that UC in the cloud is going to be any easier?

I for one have been a huge advocate for plug-n-play simplification and automation as I have watched the complexity of real-time applications and networks move to unsupportable levels. Growing up from the ranks as a network engineer, running around with a network analyzer and troubleshooting networks gave me a tremendous respect of all the layers of complexity involved with today's modern communication networks, which I firmly believe can be addressed by Software Defined Networks (SDN) for its simple philosophy of reducing complexity thru abstraction.

As an industry leader in multiple Standards Developing Organizations (SDOs) I am extremely involved in the transformation of service provider networks worldwide as they all gravitate to SDN, Network Function Virtualization (NFV) and Lifecycle Service Orchestration (LSO) technologies. Coupled with how open source has become the new syndicated industry for research and development (stay tuned for this in my next article), we are moving thru a decade of retooling in communications networks as we know it.

So with this in mind I want to share with you the new work of the International Multimedia Telecommunication Consortium (IMTC), which strives to make UC not only automatically program the enterprise network, but also the intermediary service provider networks along the path. The UC SDN Activity Group within the IMTC has determined that most UCaaS deployments will have to rely on a business grade intermediary set of networks to interconnect the enterprise (ex: MPLS, Carrier Ethernet and/or the emergence of Software Defined WANs) as the Internet provides no service level assurance (SLA) quality guarantees required to deliver business grade UC services. So the scenarios that the IMTC is now working on is defining the automation of Quality of Experience (QoE) and diagnostics across the service provider networks in which a UCaaS cloud can program not only the enterprise network, but also dynamic traffic engineering of the intermediary business network (see the diagram below).

Think about just the scenario of how much time and complexity is involved for an enterprise to statically provision and maintain Classes of Service (CoS) across all their business WANs for voice, video and data. As sites incur real-time media bandwidth load changes during a given period of time, who is monitoring that for any given real-time media session that it has not exceeded the site's WAN bandwidth allocation for a given CoS, let alone how to correct the problem when an issue is found? For example, in a DSCP Expedited Forwarding (EF) Per Hop Behavior (PHB), which most voice services are typically mapped to, packets will be marked as drop eligible when they are above their statically defined bandwidth SLA threshold resulting in call quality issues during times of heavier demand. So just even this simple scenario can be automated so that as real-time media bandwidth demands change, networks can dynamically and automatically provision themselves to a set of bandwidth polices and rules.

Stay tuned as the IMTC releases this ground breaking UCaaS SDN use case specification to automate and simplify UC Cloud deployments by the end of the year. This new IMTC specification along with how SDN, NFV and LSO is transforming service provider networks worldwide, will dramatically simplify and redefine how businesses deploy UCaaS and other real-time applications.

As usual if you want to get involved just join the IMTC and UC SDN AG to further the cause. As an FYI the IMTC has just renamed itself to Real-Time Media Software Defined Networking (RTM SDN) so more on this on an upcoming article. 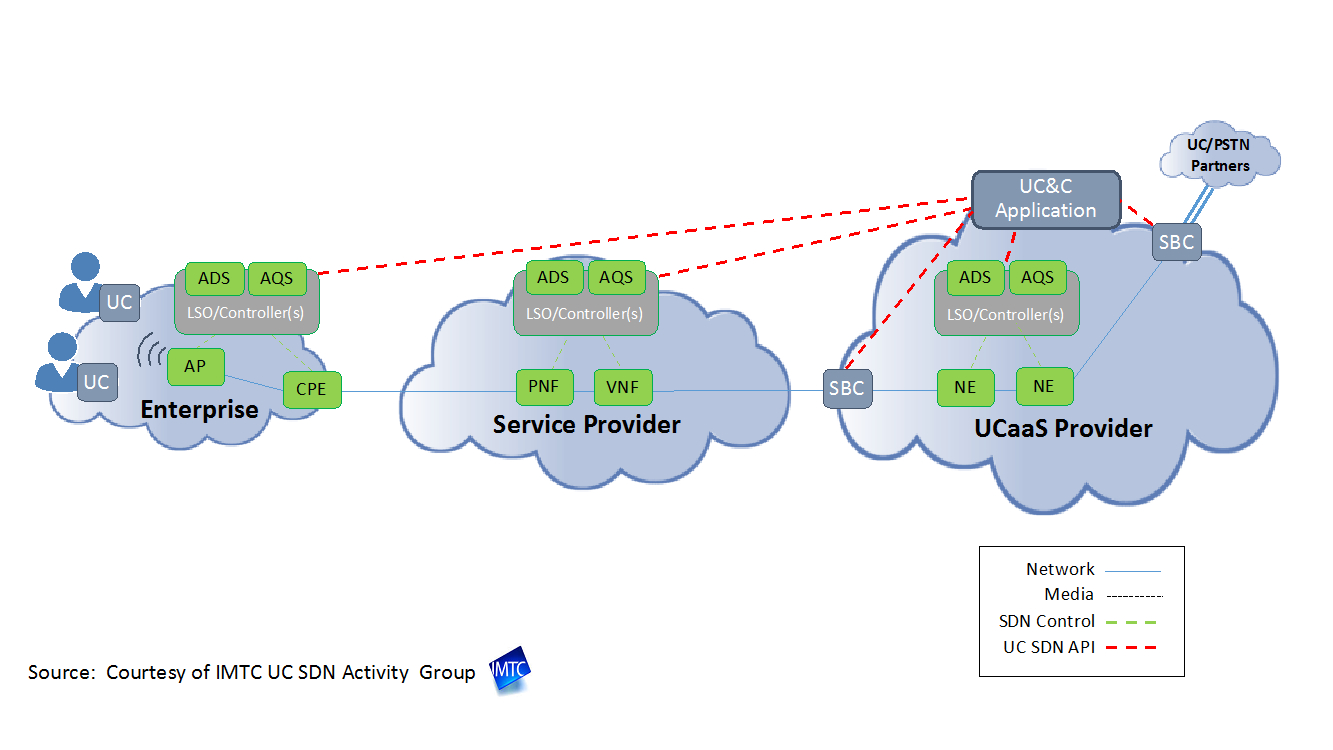 Dave Silke on the Future of Mitel

Experience as a Service