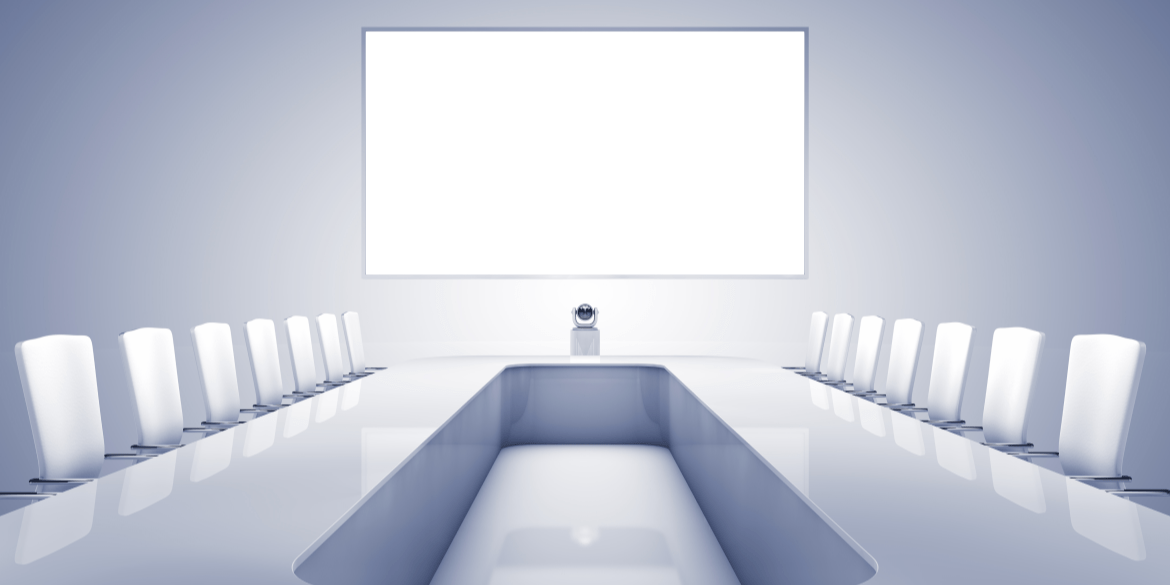 As video conferencing systems become more widely installed, there are often questions about what size monitors and how many are required. While fixed Telepresence systems make this choice easy, most video conferencing systems come as a base unit (generally a small box the size of a mini-PC), and a camera and a table-top speaker. The selection the video displays and mounting/positioning is generally left to the customer or an integrator. The challenge is that often the resulting placement and room set-up leave much to be desired. To best understand the placement, distance and positioning of video monitors in a meeting space, a basic understanding of how humans see and use video is required. Using simple trigonometry it is possible to define the variables to assure optimal positioning and impact of a videoconferencing system. This white paper will review those factors and then cover basic room set-up. It will also discuss how the new 4K displays may enhance the room video experience. 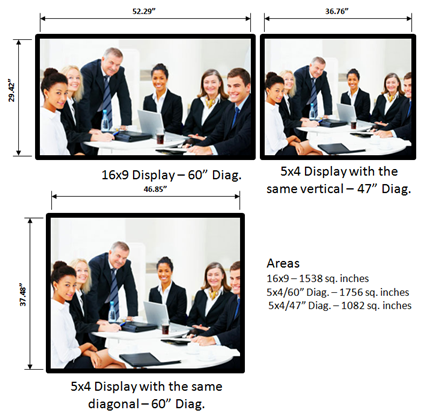 Video Display Monitors come in a variety of sizes. Generally these are described by their diagonal dimension. The diagonal relationship to the vertical and horizontal sizes is based on the aspect ratio. The aspect ratio is the ratio of the width to the height. Generally monitors come in two aspect ratios: 4x5 and 16x9. The 4x6 ratio is the older NTSC video ratio and is generally not deployed for video as it does not align well with room views. The 16x9 display is better for the width versus height of the usual participants in a room based video conference. Figure 1 shows a comparison of a similar meeting with 16x9 and 4x5 views. As can be seen, the 5x4 display with the same vertical as the 16x9 is much smaller, while the 5x4 with a similar vertical of 60" is actually larger in area by 14%, though the actual displayed images are slightly smaller, even with cropping the edges of the room. For these reasons, 16x9 is the accepted standard for video room systems. It is also the standard for home use and therefore dominates the manufacture of displays. 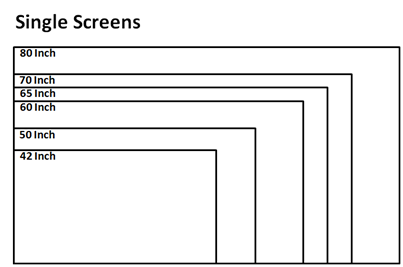 Figure 3 shows a similar comparison for dual screens as this is a common implementation in many video conference rooms. 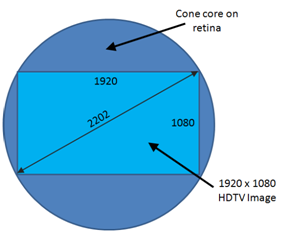 As was discussed in the Video Value white papers from PKE Consulting, the value of video is the capability to see the details in facial and body movements that enable the interpretation of reactions to a conversation. This concept, defined as selling collaboration, is where the visual feedback is critical. For good visual feedback, both high resolution to see details as well as torso views (to see arm movements) are important. This generally resolves to HD video, where 1080P is generally the highest resolution available today. However, if you are too close to the display you can see pixels, the dreaded "screen door" effect of video. The challenge then is how to have that great video for most or all of the participants, without having the pixels visible to some.

First, it is important to understand video projection and how it works with the human eye. The human eye has about 2,000 cones (pixels) of resolution in the diameter of the core non-peripheral vision. This is where you see detail. Though the human eye is capable of receiving light through almost a 200 degree arc, the acute vision is limited to about 15-20 degrees. Of the about 7 million cones in the core visual field of that 15-20 degree arc (Cones are for resolution, rods are for movement - there are about 100M rods in the peripheral field), a HDTV image captures the circular field of about 3.9M as shown in Figure 4. As the rods are denser in that 15 degree core, this is probably closer to 4.5 million cones in the average eye. So, when viewed at exactly the right distance, a 1080x1920 (or called 1080 for short) image exactly matches the eye's inherent resolution.

Even if the image had twice as much resolution, and if you sat at a distance where the screen matched the back of your eye, you could not see the additional resolution. The Society of Motion Picture and Television Engineers (SMPTE) recommends an angle of no less than 30 degrees and no more than 60 to watch a screen-based video. The THX standard recommends a 40 degree angle for 16x9 pictures. The point of this is that at the distances associated with these angles for a given screen size, the pixels on the screen are optimized to the cone density in the eye. The reason for a slightly larger angle than the acute angle of the cones is that slight eye movement increases the immersion in the event. Similarly for video conferencing, causing sys movement between participants creates a better "perception" that the event is like a face-to-face meeting. This is part of the reason that a telepresence room with three screens and participants arrayed across the screens is perceived as more life-like as you have to track to the speaking participant.

Figure 8 shows a calculation of all viewing distances for screens at the 30, 40, and 60 degree angles.

The information above and the modeling can be used to show how actual rooms would look with different sizes of monitors. Most meeting rooms are rectangular, so to accommodate the largest number of participants, the video system is generally placed on a narrow wall. Figure 8 shows a typical small conference room with the ideal viewing distances shown for different display sizes. This room is 12 feet by 11 feet. It has a 7' x 4' table accommodating 5 participants for the conference and the displays mounted directly to the 11-foot wall. The ideal viewing distances can be seen, with the ideal display size probably either the 60 or 65 inch. With the 50-inch display, three of the participants will have poor visibility and with the 70 inch the two closest participants will have serious issues with seeing pixels. 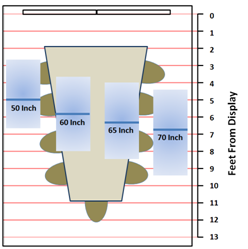 The additional resolution of 4K displays could be very valuable for video rooms. One of the key reasons that telepresence rooms have better perceived experiences is that all of the viewers are typical located at a common distance from the displays as shown in the telepresence figure. As can be seen in Figure 11, a 65-inch motor delivers ideal (40 degree) viewing in this type of system. By fixing the viewers to one side of a fixed distance table, the experience is optimized. However, this has two significant drawbacks; the number of participants and the relatively fixed nature of the space, not enabling non-video meetings.

With the video display vendors moving to 4K, this is a real potential. Both Sony and JVC have shown 4K projectors that use interpolation to create a seamless 4K image from a 2K video stream. And Canon has announced a commercial 4K flat panel display for video mastering that is claimed to not be pixel visible, regardless of distance. It is of relatively small size, only 30 inches, and more tuned to desktop use (the same issues apply for a large display at short viewing distances). LG has indicated they plan on introducing at least one 4K LCD/LED flat panel display late in 2012. With challenges in how to differentiate and compete in video displays becoming clear, 4K is probably the next frontier of competition.

As it is probable the video conferencing stream will stay 2K due to bandwidth and the cost of codecs, the adoption of 4K displays will really just eliminate the pixel visibility for close viewers. As is clear from the earlier discussions of how we see information, in reality, 2K is all most of the participants can actually see. However, the "clear" conclusion is that 4K displays could have a major impact on the perceived quality of the viewing experience in non-telepresence video conferencing rooms. For telepresence rooms with their fixed viewing distances, the 4K displays may be of little value. If the display vendors and installers respond, room-based video conferencing in traditional meeting rooms may get significantly better.

In addition to the 4K display resolution value, the next generation video systems, such as Vidyo, use SVC with a video router instead of an MCU. In this type of system, each video stream is sent to the core and then forwarded at the useable rate to each end point. So if an end point user is watching one image large and the others small, the bit rate on the smaller images can be reduced. 4K displays will open a new opportunity when combined with this technology. As long as any individual image is less than 25% of the entire screen, the image resolution will match the display resolution. This opens a new potential for the room displays to be used in new ways with the users of the room able to assign images to spaces as they see fit. As the room can receive many images at full 1080P/60 resolution, this will enable a new experience, even beyond telepresence. So a two-display room can now be seen as a 8000x2200 pixel space to use. Images of other transmission, whether video from rooms, users, or even content, could be moved and assigned wherever they fit best to optimize the experience.

With the data and information in this white paper, it should be possible to optimize both the seating and distances for most video conferencing rooms. If possible, the telepresence orientation should be used, but for dual purpose rooms that must function as both normal meeting rooms as well as video rooms, choosing the right display can optimize the video experience.

As 4K video monitors become available, their use in room systems will significantly enhance the user experience by enabling the use of larger screens with broader (closer) viewing distances.

On the PKE Consulting web site there is a two-page pdf titled, "Video Room Help Sheet" that can be used in designing rooms. Using this sheet with masking tape and a tape measure, it is possible to lay out ideal distances from display locations in a room to determine both orientation and optimal size. This design effort will pay off in assuring optimal video value and room use.