A recurring event in the early phase of the adoption of new innovations is the technology battle. This is the period in the "innovation" and "early adopter" phase where competing firms use their features and functions as the weapons in the fight for early market leadership. While this noisy struggle is playing itself out, a more silent, but no less important activity in this phase of the war is the compilation and filing of patents to consolidate and extend the ground being won in the market.

[I make repeated use of military language and metaphors in this paper, but I make no apologies for this. To misquote Clausewitz, "Business is war by other means." I doubt that many would disagree.]

There has been a great deal of discussion over recent years about how the US Patent system is stifling innovation and economic growth. On September 16th, this culminated in the passing into law in the United States of the America Invents Act: a significant reform of the patent system. The purpose of this paper is not to debate the merits of the old or the new patent system, but to examine how that system may be used by the UC market leaders to compete.

As an illustration of how the UC intellectual property battle may play out, let's take a look at three major corporate transactions that took place in the last six months among the technology titans.

In May 2011, Microsoft announced its intention to purchase Skype for $8.5Bn. The bulk of this transaction value was arguably based on the brand, the namespace (i.e. the list of users) and the tangible business and technology. However, also included in the deal were 68 approved and applied patents which probably represent the bulk of all IP in peer-to-peer communications. Therefore, we can assume that the high valuation (according to some pundits) reflects the fact that Microsoft will soon own a monopoly on the IP for this technology for the next 15-20 years. If we guesstimate that 10% of the value of the deal was related to IP, then the price per patent (including filed but not approved patents) was $12.5m.

In the April it was announced that Google had bid $900m for the Nortel patent portfolio (which interestingly did not accrue to Avaya when they purchased the Nortel enterprise business). However, in July they were trumped by a $4.5Bn bid by "Rockstar Bidco LP" (aka Microsoft, Apple, RIM, Sony, Ericsson and EMC). While this IP battle was as much about other technologies (e.g. mobile devices and internet search) as it was about UC; this was, after all, the Nortel portfolio so UC was a key part of the consideration. Why "Rockstar Bidco" felt the need to counter with a 400% 'raise' on the Google bid is not clear. However, given the potential for infringement damages awards reaching hundreds of millions of dollars, the consortium was clearly happy with what they got and what it cost them; which was $750k per patent.

In August, Google announced its intention to purchase Motorola Mobility for $12.5Bn. Until then, the Android platform had been under a determined assault by the IP lawyers who were suing the companies who were developing on that platform for IP infringement. Therefore, the general consensus on this transaction is that Google was more interested in the 17,000 Motorola patents than it was in the device hardware business. This makes the price per patent (ignoring the value of the business, which was arguably a "twofer") $735k. At least one report specified 18 particular patents that were critical to the defense of Android: this would make the price of each of those patents $694m.

Once again, the examples above are not UC specific, but they are illustrative of the importance that is being placed on an 'IP moat' by technology companies. A healthy IP portfolio in a given technology domain will either:

If you subscribe to the 'IP moat' theory, then it is useful to take a look at the IP arsenal that is being assembled by the leaders in the UC space[1]. I conducted a straw poll using the US Patent database, counting the UC specific patents that are either Granted or Applied. For comparison purposes, I also took a look at all patents for each company, both Granted and Applied.

Note that I call this a "straw poll" because the numbers are flawed:

To do this survey comprehensively would take many 'person-years', so these numbers below are only broadly indicative of: 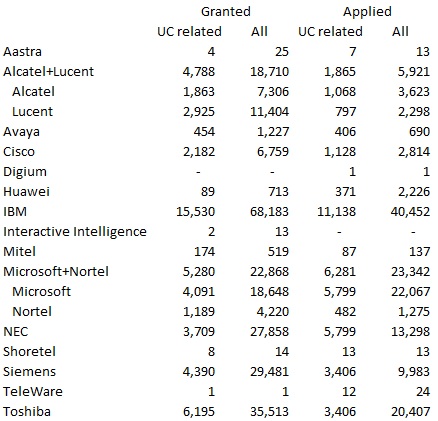 Vendors appearing in the 2011 Gartner Magic Quadrant for UC, and their US patents

Acknowledging once again the caveats above on the quality of this data, there are some companies that emerge as lunch eaters, and some that appear destined to have their lunch eaten. As a very rough rule of thumb, a number greater than 1,000 could be deemed to be viable. If a company has numbers greater than 1,000 in all four columns, then they are probably safe from litigation as well as being capable of litigating. Having said that, the notion that "quantity = quality" is refuted by the '18 key Motorola patents' theory referred to above.

Some interesting points to note:

Some readers may believe that the data and points made above have little to do with the long term business viability of the UC vendors. Others may see patterns that start to correlate with other data. Either way, given that:

...it is clear that intellectual property is becoming an even bigger part of the technology business (and therefore the UC business) than ever before. Whether any of these IP investments achieve payback at any time in the future remains to be seen.

If there are any clearly identifiable winners, the IP lawyers are going to be among them. As Ogden Nash drily said:

"Professional men, they have no cares; whatever happens, they get theirs."