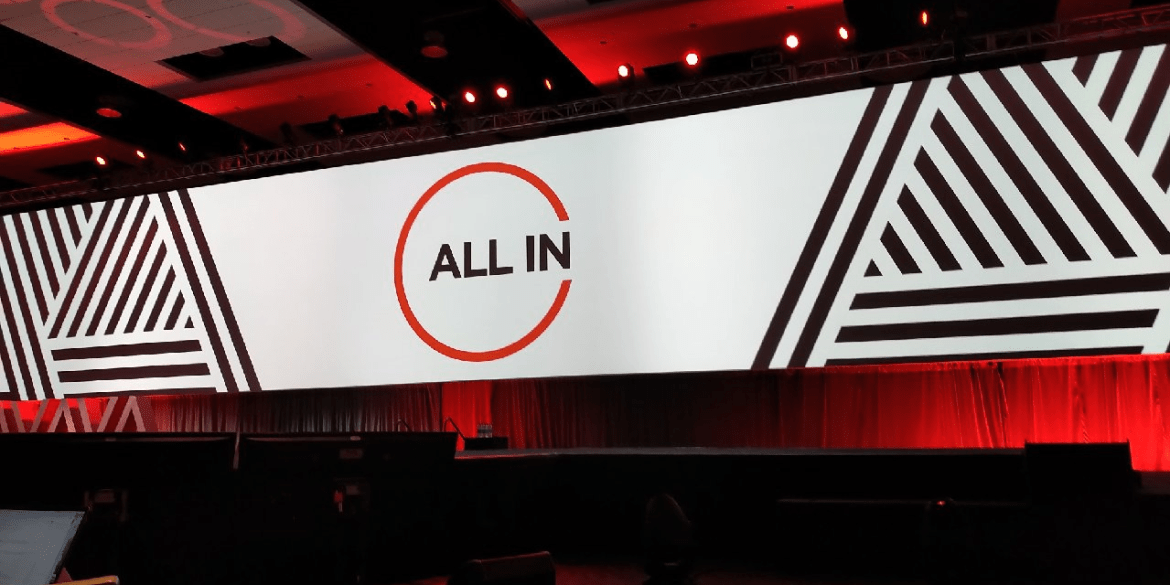 Going all-in can mean many things, and the fact that Avaya’s Engage event was held in Phoenix rather than Las Vegas suggests that Avaya is not gambling with their future. Coming out of Chapter 11 and then going public again, the company has had its share of nine lives, and it’s fair to say they really need to get it right now – and right now.

All-in was certainly the main theme at Engage, and at face value, CEO Jim Chirico’s message on this was about the cloud. Being late on this transition has been costly for Avaya, but the good news is that enterprises have a long way to go on this journey, and a massive base of 100 million seats means there’s plenty of upside to come. Also, with cloud technology evolving so quickly, it doesn’t take long to catch up, especially with some well-timed partnering.

Aside from being all-in on cloud, this was a strong message to partners and customers that Avaya is all-in to win. Most of what I saw at Engage was how Avaya has put all the pieces together, with a mix of innovation to refresh the portfolio, vision with an energized leadership team, and opportunistic partnerships to get best-in-class technologies working for them now.

With all that said, Avaya’s proclamation of being all-in is less a declarative statement, and more of a subtle way to test the loyalties of their base. Avaya is laying it out there for all to see, essentially saying we’re all-in for you – now, are you all-in with us? Time will certainly tell, but I liked a lot of what I saw. I was one of a handful analysts at Engage – there will be a dedicated, full-on analyst event in April – and while only there for a limited time, here are two takeaways for what being all-in looks like to me. 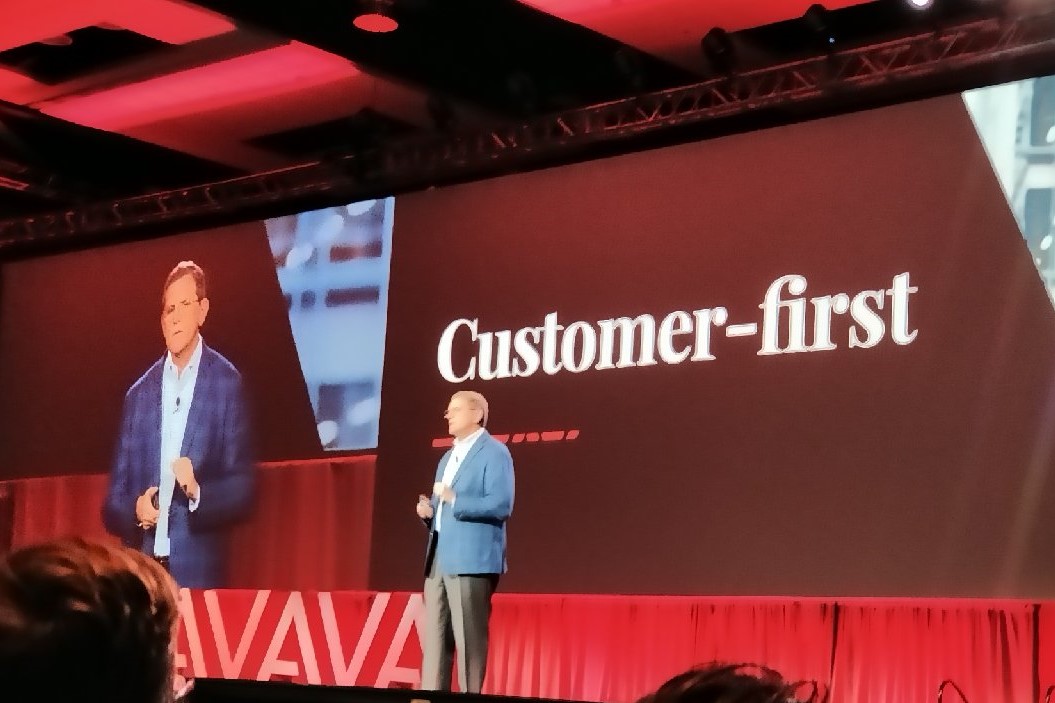 Jim Chirico set the tone right away, showing how they’ve gone all-in to get their financial house in order. They’re doing a lot of the right things, such as paying down $250M in debt and increasing R&D by $100M. As per their earnings call shortly after Engage, there are some other encouraging metrics, such as buying back $132M of common stock, and 59% of revenue is now on a recurring basis. They’re still slightly in the red – a $54M loss last Q – and the YoY revenue decline is only 3%. Going forward, Jim’s view is bullish, citing “top tier margins” and being “stronger than ever.”

That last comment is debatable, but overall the company is performing well, and if you believed every vendor’s claim about how much business they’re taking from Avaya, revenues would be down way more than 3%. With an installed base of 100M seats, and 90% of the Fortune 100, Jim is right to say that “our customers are the strength of this company.”

As such, financial performance aside, the best indicator of success is net new customer growth. We didn’t hear how many customers left Avaya last year, but Jim said they added 6,000 new customers last year, including over 500 competitive displacements. Those numbers really jumped out for me, and seemed to have flown under the radar. Previously, we have heard about Avaya adding 1,300 new logos or contract renewals, but that didn’t really tell us if the company is actually generating any net new growth. Organic growth is great, but given Avaya’s circumstances, that’s not going to be enough.

For customers and partners to go all-in with Avaya, they need to know it’s not a sinking ship. It’s one thing to protect the base, and keep growing by migrating those customers to the cloud. For Avaya to be all-in to win, they have to be able to take business away from competitors, and 500+ displacements are pretty good validation of that – especially for a company that was in Chapter 11 not that long ago.

2. Partnering is the right strategy 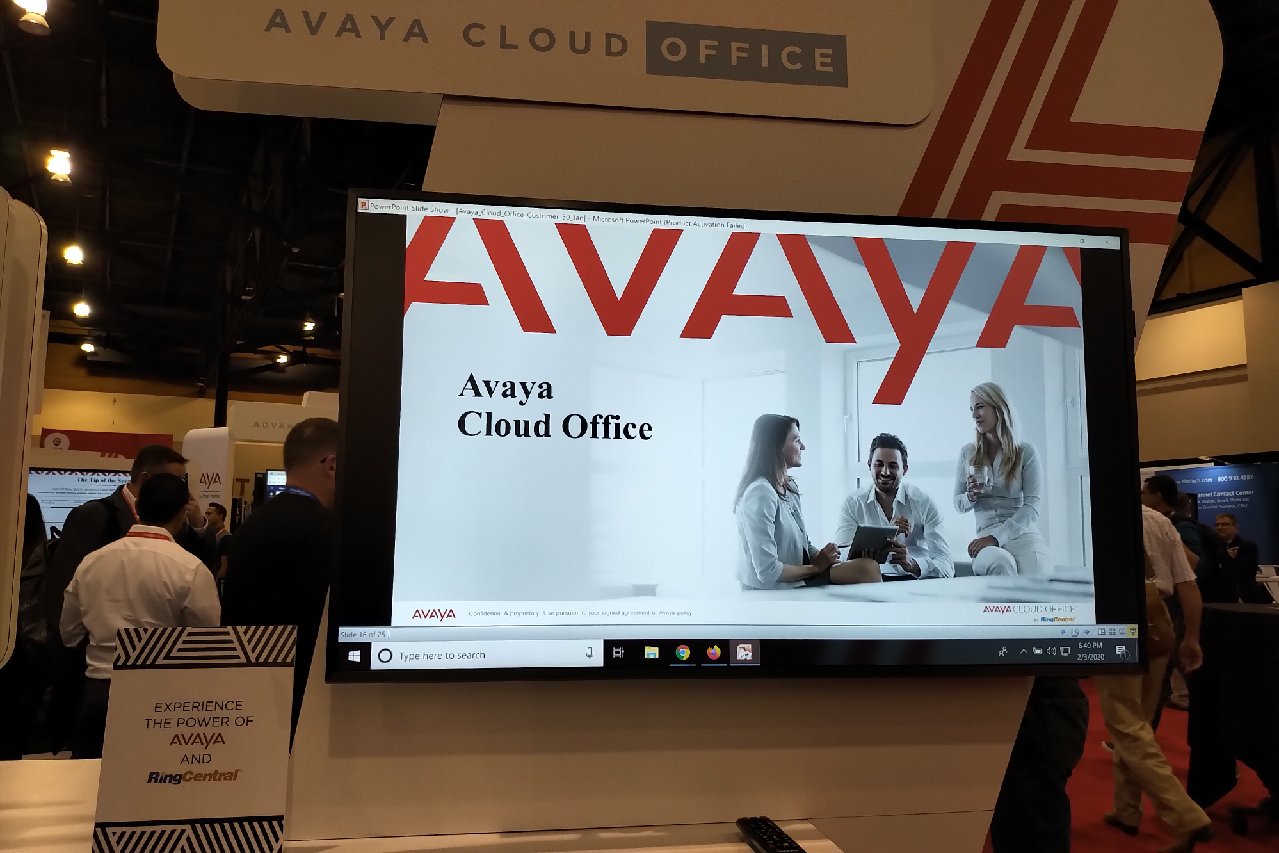 Being in catch-up mode with cloud, it’s too late to build from the inside-out. Development cycles take too long, and ecosystems are established now for the key areas Avaya needs to compete in. As Jim Chirico said, the customers are their strength, and the best ROI will come from protecting and nurturing their base, rather than investing in building their own solutions. Given the size of their customer base, sustainability hinges more on keeping them happy than trying to own technology in areas they don’t have a clear competitive advantage.

To that end, they talked about the virtues of partnering with the right kind of companies that will help keep their customers in-house.

Prime examples were Google for conversational AI, IBM for their global data center footprint, Nuance for speech biometrics, Verint for WEM, Noble Systems for CX gamification, and of course, RingCentral for ACO. The race is on now for both cloud migration and AI, and Avaya has to be market-ready on both fronts for the all-in messaging to really resonate.

Every one of these partnerships has a purpose in the overall scheme of things, and for Avaya, none is bigger than RingCentral. The merits of this pairing have been widely covered, and the main message here is that both companies stand to benefit via the offering, dubbed ACO – Avaya Cloud Office. Avaya gets an industry-leading public cloud UCaaS offering to fill a big hole in their portfolio, and RingCentral gains access to a massive customer base overnight.

There’s a lot to like about the RingCentral partnership, and in terms of getting customers and partners to go all-in here, we heard some interesting details during the breakouts. Understandably, long-time Avaya partners may not be keen to start selling a competing offer for UCaaS. On the other hand, it’s far more established than what Avaya can offer internally, so co-branding with a leading UCaaS platform reduces the risk of losing those customers to other UCaaS players.

That said, Avaya isn’t handing over the UCaaS business in entirety to RingCentral. End customers could elect to use RingCentral’s PBX endpoints, but by going with Avaya’s endpoints, they get a richer feature set, such as hotdesking, sharing control mode, and extension-to-extension dialing. Furthermore, Avaya manages the professional services piece. When end customers need technical support, it comes from Avaya, not RingCentral. Overall, then, their partners get the best of both worlds – an industry-leading UCaaS platform they can sell today, as well as Avaya offerings they can monetize that add value to the platform, and keep them happy with Avaya.