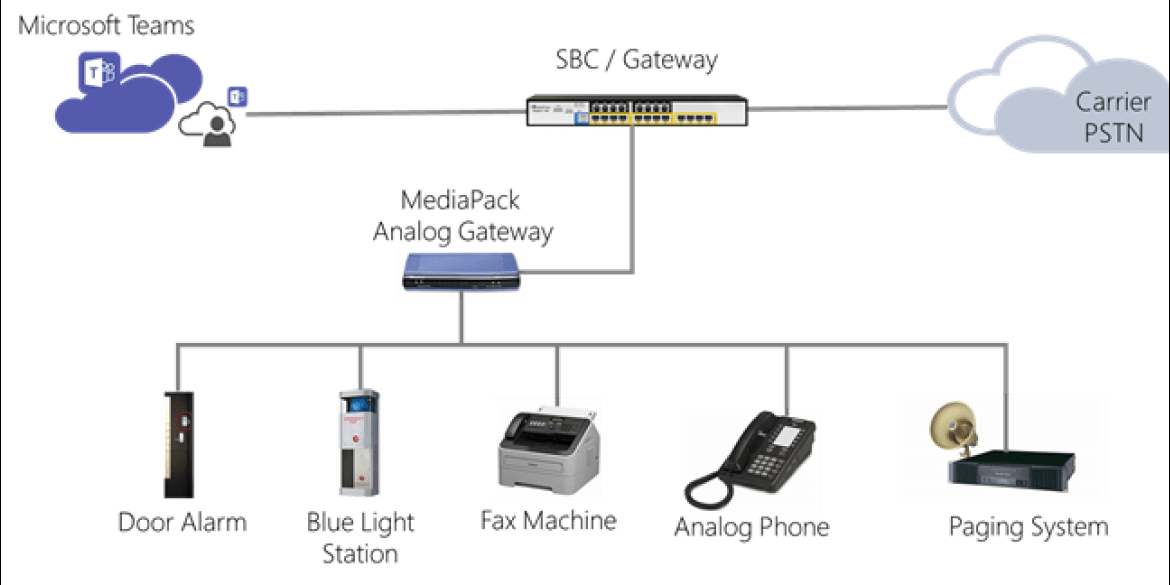 Migration of the enterprise analog communications infrastructure to session border controllers is an important and compelling decision. This migration is necessary for migration of communications services to the cloud and can produce immediate savings and improved services in most cases. This article describes the reasons and the methods for an analog infrastructure upgrade.

Overview of the Problem

In most cases, these analog devices are connected as telephone numbers on the enterprise PBX gateways and require a PBX license for each line. The economics of these licenses will be reviewed in a later section of this article.

Some of these analog devices are moving toward Internet Protocol (IP) products, as part of the trend towards the Internet of Things (IoT), but an IoT conversion can be costly and time-consuming.

Also, it can be difficult and costly to convert these analog devices and copper pairs to voice over IP (VoIP) and session initiation protocol (SIP). In some older buildings retrofitting to CAT 5 cabling is really cost prohibitive whether due to the age of the building or to the asbestos mitigation that is mandated if the walls are opened. In some cases wireless solutions are proposed, but most enterprises find that wireless replacement of the copper pairs do not provide sufficient connectivity or reliability.

It is important at this time to review and possibly update your analog communication infrastructure for four reasons:

The best practices solution for modern management of analog communications infrastructure is the use of session border controllers (SBCs) with analog adapters to connect and to manage the analog connectivity. A session border controller is an Internet Protocol routing system that connects systems, devices, and/or telephony trunks under advanced programmatic controls. Routing algorithms can range from simple to very advanced. The routing can be based on automatic updates from the enterprise directory for information about users, devices, and telephone numbers.

SBCs have an Internet Protocol architecture that can be augmented with analog adapter modules that support signaling to and from the analog devices, as well as conversion of the analog signaling to and from session initiation protocol (SIP). The analog adapter module also provides the required dialtone and dialing capabilities for the analog device. Modern SBC’s also include sophisticated yet easy-to-use management consoles that make them simple to include in the overall enterprise network and IT architecture.

Since SBCs have been the gateways to the PSTN for many years, they have advanced and sophisticated security provisions included in their core software and hardware.

In addition, some SBC’s, such as those produced by AudioCodes, are tightly integrated with the leading cloud-based communications solutions, such as Microsoft Teams Phone System with Direct Routing.

AudioCodes has been partnering with Microsoft for over a decade to augment the Microsoft capabilities and ensure that an enterprise can have a successful and economical migration to and ongoing implementation of the Microsoft Unified Communications, Collaboration, and Teams workflow solutions. This includes the current AudioCodes close partnership with Microsoft to support the Microsoft Teams Phone System.

The Microsoft Teams Phone System connects from the cloud to users using secure Internet Protocols including SIP. For many users who work collaboratively on desktop and mobile devices, that is sufficient connectivity to their computers, laptops, tablets, and smartphones. However, when users or departments require device connectivity such as desk phones and analog communication infrastructure devices, an intermediate routing and connection point is required. AudioCodes SBCs include the necessary software and device connectivity for this purpose. This includes a range of analog adaptor modules that can match the configuration needs for the enterprise.

In addition, Microsoft offers two methods for connecting users and devices to the PSTN:

Most enterprises are choosing option 2, Direct Routing, because of the contracts and cost arrangements with existing PSTN carriers and because it is often much simpler and more convenient to manage the telephone numbers and dial plan within the enterprise infrastructure using the SBC.

A simplified topology diagram representing the factors described in this article is shown below. The diagram shows the logic of the configuration, but not the expected provisions for redundancy and administration.

AudioCodes offers several programs to facilitate the migration of analog devices to its SBCs. Of particular interest is AudioCodes’ Infrastructure as a Service (IaaS) offering through which AudioCodes will install, own and manage the SBC infrastructure for an agreed period of time. An enterprise may continue to adopt the AudioCodes IaaS offering as a long-term approach or may convert to enterprise ownership and management at the appropriate time.

A migration of the enterprise analog communications infrastructure to a modern SBC configuration is a compelling action for almost any enterprise. As indicated, this migration can be a cash-positive, cost saving measure that also prepares the enterprise for an easy evolution to cloud-based communications. AudioCodes has the range of both products and services to make this feasible, possible and successful.

If that cloud-based communications solution will be Microsoft Teams Phone System, then the AudioCodes solutions are even more attractive. AudioCodes is a proven Microsoft Partner and has a broad established base of enterprise clients that have implemented AudioCodes SBCs both for the architectural value and for the certified integration with the Microsoft offerings.