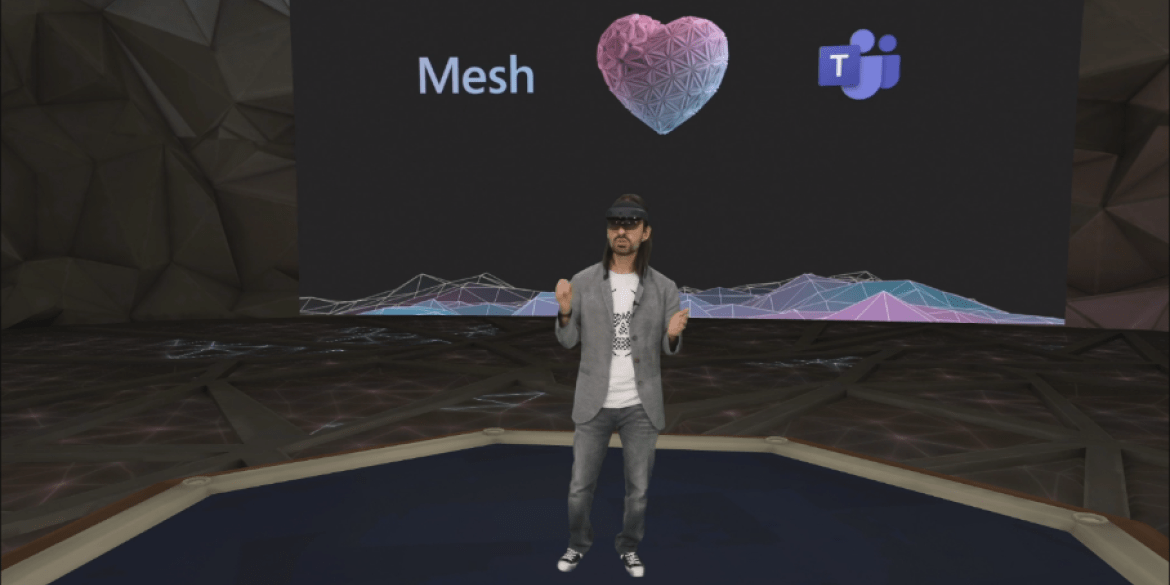 It’s only fitting that with Ignite being held this year as a virtual event, the big story was introducing Mesh, their mixed reality platform. We’ve gone a whole year now without attending live events, and virtual events have become so normalized, that they’ve become the new reality.

Like anything else, if you keep doing something long enough, that becomes reality, even if it’s virtual. So, nobody thinks twice now about seeing VR demos virtually – although this would have seemed laughable five years ago – but as they say on the news these days, that’s where we are now.

If you’ve grown up a gamer, you’ll know that here isn’t where you are physically - it’s whatever space your HoloLens headset takes you to. Who better to validate that than the inventor, Alex Kipman, and he sure showed us what’s possible at Ignite. Before I lose you completely in all these quasi-real worlds, the big idea here is that Mesh takes things to another level for something that’s been around almost 10 years.

I’m not an expert on these things, but as any gamer will tell you, virtual reality and augmented reality are not new. While these technologies aren’t for the masses – so far - the use cases are growing, including for collaboration. Whereas VR and AR replicate physical reality virtually – where we experience things for ourselves – the mixed reality enabled by Mesh and Azure allows people to interact with each other virtually, and in real time.

If you’re thinking Star Trek or Star Wars, you’ve got the idea. In short, via holoportation, and wearing a HoloLens 2 headset, you can beam yourself into someone else’s space and interact – not just speaking or gesturing, but actually collaborating. The boundaries of space and time dissolve, and just like Inception, you sort of enter someone else’s consciousness and become part of their dreams. Kinda scary to think where this could go in the wrong hands, but in the right hands, the possibilities are pretty exciting. Note – all screenshots here are mine. 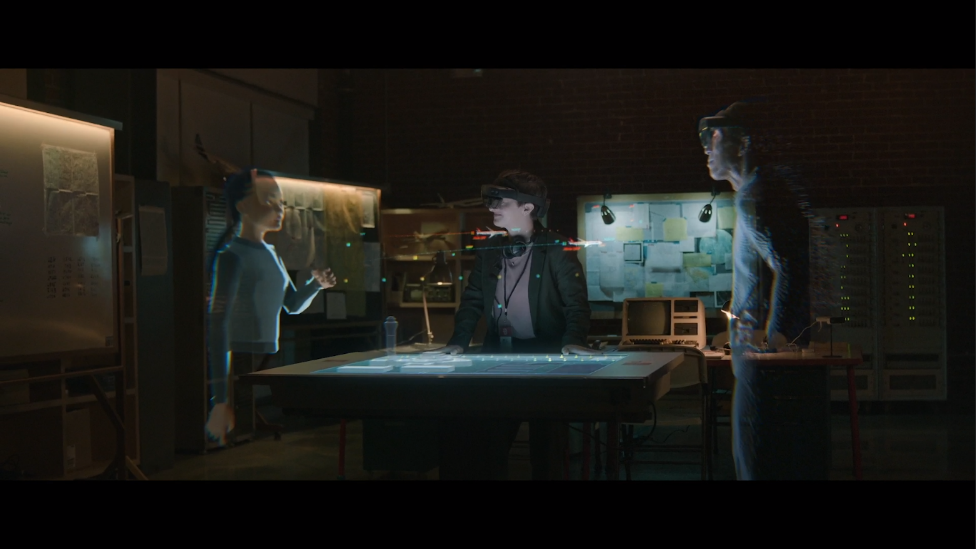 Is There Really a Market for Mixed Reality – and Why Now?

A few years back, I saw an early demo of HoloLens in a meeting room setting at a Microsoft event. It was pretty clunky, and definitely overkill for the task at hand, so the enterprise use case didn’t look promising. During Ignite, we saw far more compelling use cases, where one person could port themselves into a physical meeting space, or two people from different locations could meet in a totally virtual space. The lines between Xbox and UCaaS start to blur, and it’s no accident that the worlds Mesh can support look as much like gaming experiences as they do workplace experiences.

Aside from considering the business value of Mesh in the collaboration space, it sure looks like Microsoft is betting heavily on mixed reality. This is a far cry from business software and the desktop world they practically invented and have dominated for so long, so there must be some strategy at work here.

Just like PBX vendors needed to invent Unified Communications as their successor technology, by placing Mesh front and center at Ignite, it looks like Microsoft is showing us how mixed reality could be their bridge off the desktop and the physical world of endpoints, and into a new world where 2D blends with 3D. 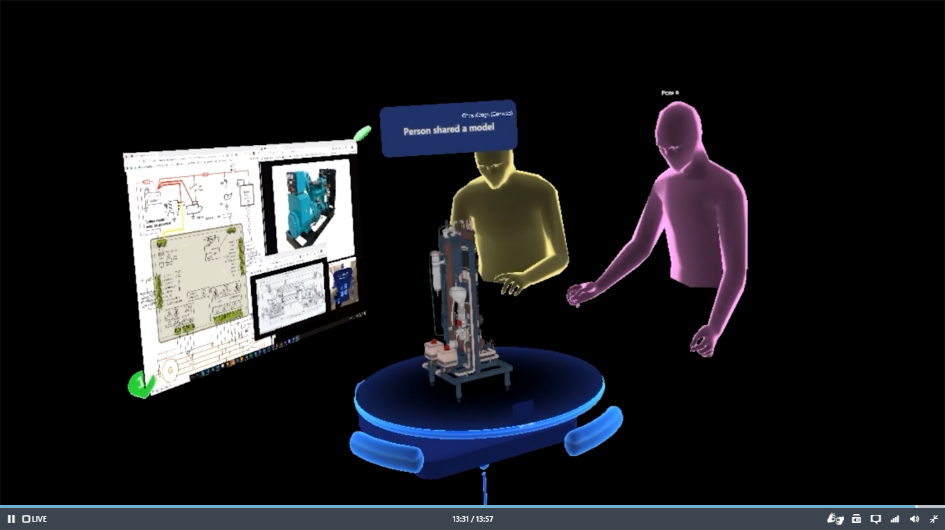 With Mesh, there isn’t a PC to be found, nor are there any screens or keyboards. Collaborating without those familiar tools would be unthinkable today, but once you strap on a HoloLens headset – endpoint, really – you’re operating in an entirely different environment.

We’ve been shifting from PCs to smartphones for some time, and as with desk phones, PCs will decline over time. As we evolve from 4G to 5G and then 6G, AI and IoT will ascend, and eventually connectivity will be all around us, in the form of wearables and ambient interfaces. PCs and screens will still be around, but they won’t be the center of our digital lives.

This evolution probably won’t unfold exactly this way, but Microsoft isn’t taking chances, and they need to be at the vanguard for a post-PC world. In this context, Mesh totally makes sense. This may still be a developer-centric space, and only by dreaming big will the practical applications emerge.

The high cost of HoloLens 2 headsets – in the $3,500 range – will surely be a barrier to mass adoption, but since we’re dreaming big here, you have to believe that if you build it, they will come. How about this for sizzle? During a fantastical holographic demo led by Alex Kipman and Cirque du Soleil co-founder Yves Laliberte, we got a glimpse into Hanai World, which is orders of magnitude more interesting than Second Life, and is powered by Mesh. Not sure if I want to live in this world, but it sure looks like fun. 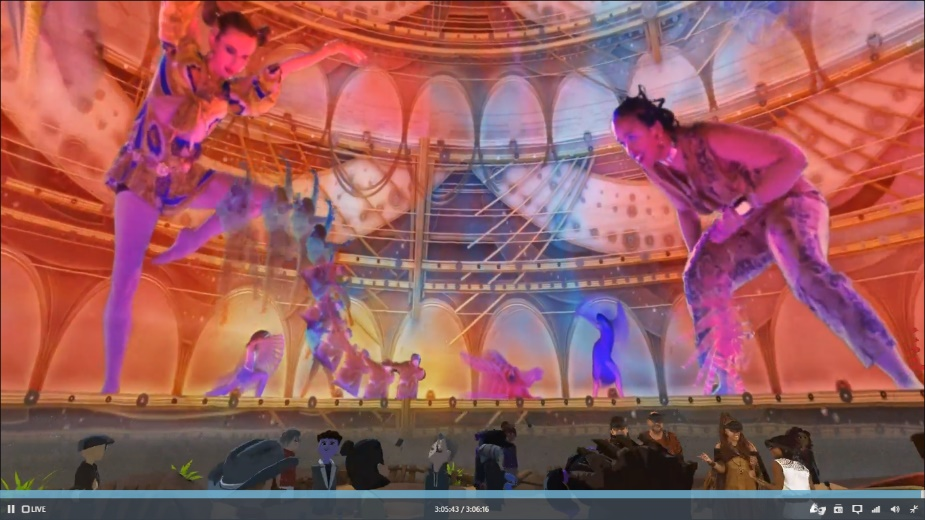 What About Microsoft Teams and Collaboration? 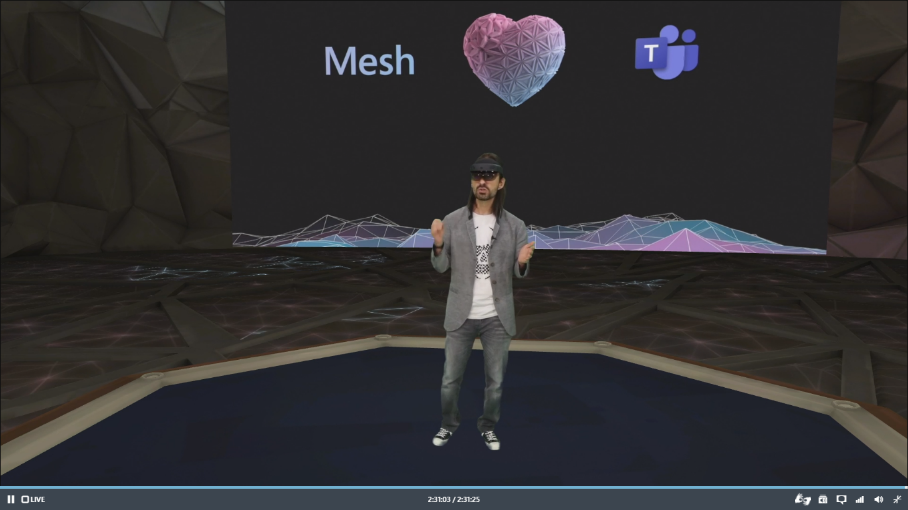 The mixed reality collaboration scenarios outlined above are probably as far as things can go for now with Mesh and Teams. While the audience messaging at Ignite was primarily for developers in the consumer world – especially gaming and entertainment – Teams is too big to leave on the sidelines. Of course, with the pandemic dictating work-from-home and touchless interaction, the timing is actually great for Mesh to drive immersive collaboration experiences, anywhere, anytime.

For now, most of the excitement will be where the gamers live, but in time, Mesh will expand the possibilities for collaboration, and with that, the mixed reality use cases for Teams. I’ve only touched on a handful of the concepts covered at Ignite, and here’s an example to illustrate what’s coming.

In the screen shot below, an engineer is doing a site inspection for bridge. In the physical world, this can be quite difficult and dangerous to do, but with holographic rendering and spatial visualization, the engineer can be virtually ported to the site, and do a more thorough job with no risk of harm. This isn’t what knowledge workers deal with in the office, but without the constraints of time or space, it’s not hard to imagine how Mesh can enable new forms of collaboration. 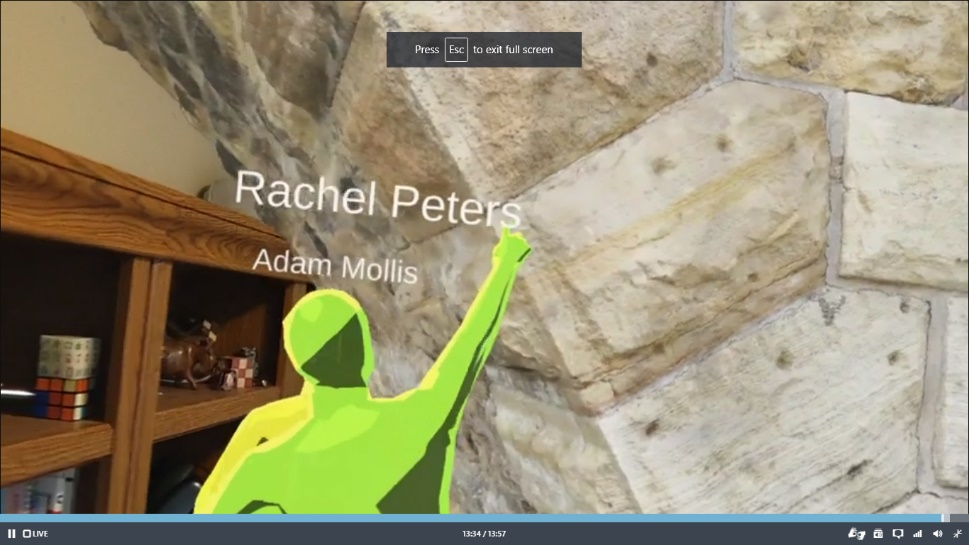 To conclude, I’ll deftly jump from the virtual promises of Mesh back to the real world of collaboration that Teams is expressly built for. I only took in a few sessions during Ignite, but that included an update specifically for Teams. Prior to Ignite, I also attended an analyst-only briefing on these updates, so there wasn’t anything there new for me. It’s worth noting, though, that the Teams updates at Ignite were geared to a general audience rather than analysts. The features were the same, but I found them presented in a more relatable way at Ignite, where the benefits for users were more apparent. Both updates were informative, and in short, Teams has lots of great new features, and you can explore them here. 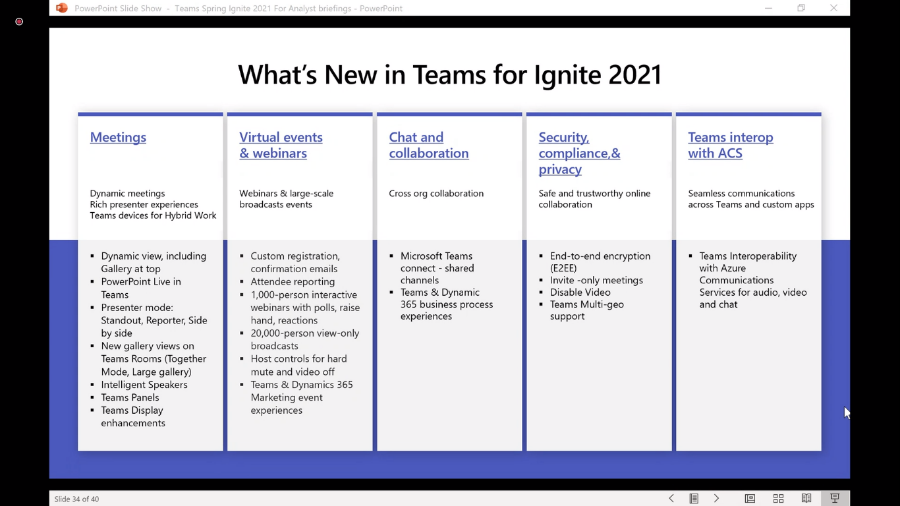 Finally, I’ll add a coda to Microsoft’s collaboration story that can be easy to overlook. Last year, Microsoft acquired Metaswitch, a company I have a long history with, and happened to brief with them during Ignite. At face value, the fit is hard to see, but at minimum, Microsoft gained a first-rate engineering organization with deep expertise in carrier networks. Not only that, but Metaswitch’s MaX UC has strong mobile UC capabilities, something I was able to validate first-hand via market research I conducted for them last March.

No doubt, this strength could be used to improve the Teams mobile UX, and help keep the pandemic-driven adoption momentum for Teams going throughout 2021. For carriers, MaX UC deepens Microsoft’s collaboration reach in other ways as well. First off, whereas Teams must be resold by carriers as a Microsoft offering, MaX UC can be branded under their name for UCaaS. Not only is this good for their business, but it provides an offering for businesses that aren’t Microsoft shops. Add to this a strong mobile UC UX, plus a direct routing SBC solution, and it becomes easier to see why Microsoft acquired them.