Reimagining Voice in the Age of AI

Just as the cloud was the trend du jour last year, it’s AI’s turn in 2017, and taken together, there’s a lot of disruption happening in the collaboration space. That ground has been well-covered here at BCStrategies, and we’ll be doing more of the same at our upcoming BC Summit. While it’s fun to pick through the many disruption scenarios, what decision-makers really want to know is where the opportunities lie. This is more difficult to articulate, since AI is just emerging as a force in the realm of business communications, and there’s not much out there in terms of a track record.

That’s definitely starting to change now, and things are moving quickly on multiple levels. I’ll touch on three here, all of which will also be further explored at the BC Summit.

First, the opportunities in our space are poised to expand as the AI developer ecosystem evolves beyond the consumer world, where the focus is mostly on scaling ecommerce. The applications are very different for business, both within the enterprise and the contact center, but new forms of value will come from all the innovation taking place.

Second, the AI world itself is rapidly evolving, and I’m really using that as an umbrella term for a host of related technologies that are independently focusing on business-level opportunities. AI is a force of its own, but there’s an important constellation around it, including chatbots, machine learning, natural language processing, cognitive computing, and even IoT. All of these have potential to impact the collaboration space, and at minimum, decision-makers need to be aware there are multiple streams of technology coming of age now that will be relevant to business success.

The third level in terms of how things are changing has to do with the players. Innovation comes in many forms, but it tends to happen faster when driven by companies with a lot of market power. As we’ve seen with UC, much of the disruption has come from players not native to the landscape such as Slack, Twilio, and even Google.

As collaboration has become more messaging-centric, this has opened the market to other outsiders like Facebook and Apple. Not to be left out of the equation, of course, we have Amazon playing a few different angles. While one cannot dismiss the dominance of Cisco and Microsoft in the UC space, all of these new entries have substantial market power, and they’re not entering this market for the same reasons as the landed gentry who built up UC as a successor to the PBX.

New Opportunities for Voice with AI

I’m going to illustrate this further by looking specifically at voice, and it may not be evolving the way you think. Of course, there remains a major business opportunity in monetizing voice services, either with TDM or VoIP, both fixed line and mobile. There is no shortage of cloud-based operators for businesses to choose from, but this isn’t the opportunity that Amazon in particular is after, especially when framed around AI.

That opportunity depends first and foremost on how well AI plays with voice, and a prime indicator of that is voice recognition accuracy. The chart below is sourced from Mary Meeker’s latest Internet Trends report, and shows how Google’s machine learning accuracy has now reached the 95% “threshold for human accuracy,” essentially meaning that it’s more than good enough for business-class applications. We may never get to 100%, and it would be foolish to hold off deploying these types of applications until they’re foolproof. The opportunity is happening now, and hitting the 95% level in 2017 as shown below is another reason why.

When that accuracy level was closer to 75% in 2013, it would be easy to dismiss AI as having much relevance for voice-based communication in the enterprise. We all know that machine learning improves the more you use it, and you don’t need 100% accuracy to leverage the automation benefits that come when AI is paired up with voice. 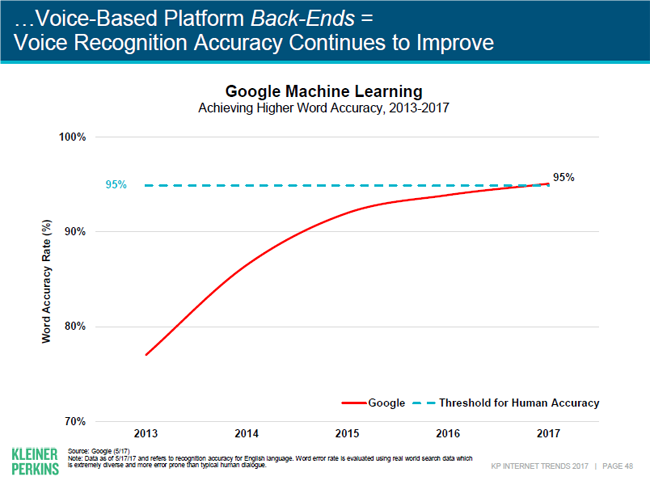 While most UC-based AI applications are focused on the contact center, there’s lots of opportunity inside the enterprise, and that largely depends on how you look at things, as well as where the developer community puts their efforts. Now that voice has reached the 95% “threshold,” there’s less risk in deploying applications to leverage AI inside the enterprise. The logical starting point would be digital assistants to help workers manage their schedules, as well as applications to automate workflows to improve collaboration. As those use cases become proven, voice-based AI will no doubt find its way into other areas such as training and knowledge management, but for now, I’m just focusing on voice.

To illustrate, here’s a new application developed by SkySwitch that ties AI to voice. For lack of a better name, it’s called SkySwitch for Alexa, and for customers using their hosted platform, end users can use Amazon Alexa to voice-enable the calling process on their PBX. Instead of going to the phone and punching in the extension, you just dictate the request to Alexa. Presuming that Alexa gets it right, workers can use voice to automate a tiny part of their day. Now think about someone who makes 30-40 calls a day, and this application doesn’t sound so trivial. Furthermore, it’s not fair to expect 100% accuracy from Alexa, since we’ve all misdialed numbers when using our fingers. 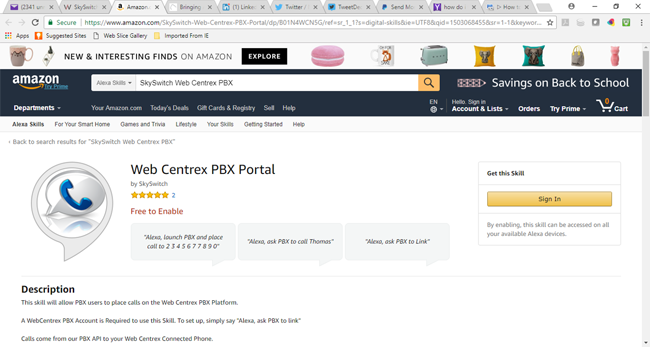 To clarify, this screen shot isn’t the actual application, but rather how SkySwitch customers can access it. Why it’s called the “Web Centrex PBX Portal” is beyond me, but this is basically in the Amazon app store. The fact that this application is free is beside the point – it’s a nice value-add for SkySwitch’s customers – what’s important is to see the emergence of enterprise communications applications in Amazon’s world. There’s a separate analysis around Amazon’s motivation to be in this space, but IT decision-makers need to know that they’re here now, and for channels, this is emerging as a new way of doing business.

To Reimagine Voice, Think About the Ecosystem

If you thought the Echo device was just a toy to use at home to order books on Amazon, think again. To reiterate, now that voice accuracy has reached that 95% “threshold,” companies like Amazon are seeing – and creating – new ways to use voice, both at home and at work. The current role that voice plays within UC and within the contact center will not change, but it’s not the only way it can add value. SkySwitch is a pretty simple application, but it’s just the beginning, and Amazon is keenly aware of that.

Below is another slide from Mary Meeker’s presentation, and if you don’t think Amazon is a driver of change yet in the enterprise, you won’t have to wait long. The hockey stick growth curves here tell a strong story, both for the installed base of Echo endpoints, and the applications ecosystem – which Amazon calls “skills” – that is exploding to drive adoption. As with anything else, value is defined by utility, and once workers get comfortable using Echo to dial their calls, it won’t take long for other AI-driven productivity applications to emerge.

There’s so much more to explore here, and this will definitely be on the menu at the BC Summit. Whether or not you’re attending, my main takeaway is that AI-driven voice applications are primed now to create new opportunities, and that should be good news for channels trying to find their own opportunities in a crowded and rapidly changing market. 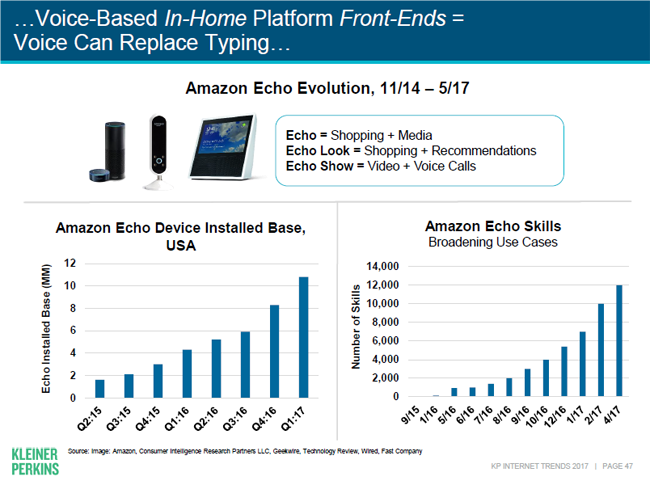