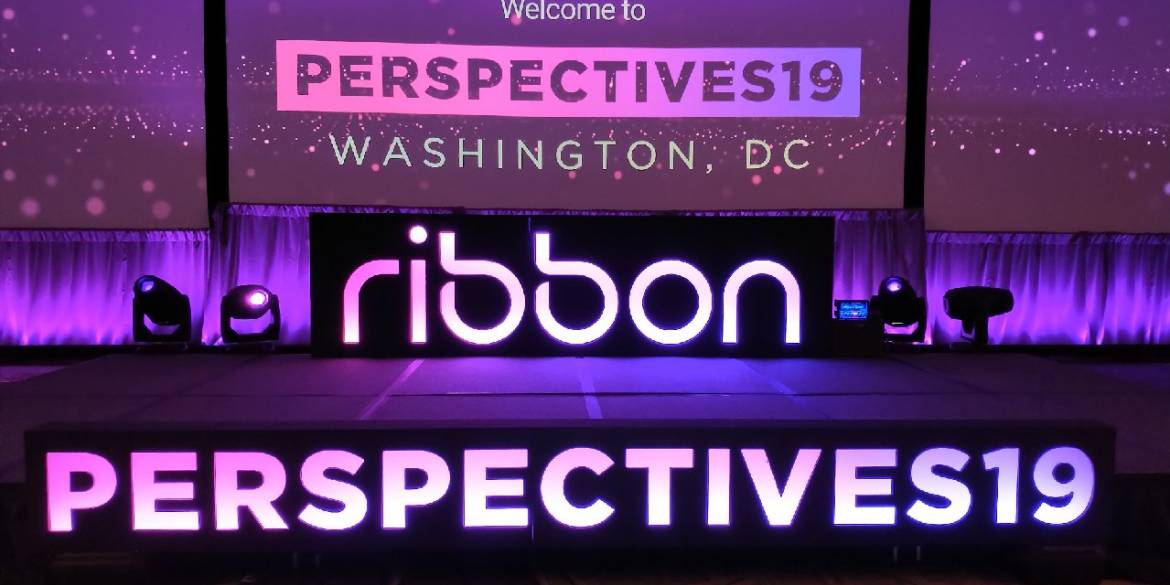 Ribbon Perspectives19 – is Kandy the Little Engine that Could?

Last week, Ribbon Communications hosted Perspectives 19, their annual customer and partner gathering, along with a modest contingent of analysts. For collaboration analysts, this is an in-between event, since Ribbon is primarily carrier-focused, and only with the recent advent of Kandy has there been a UC-related offering that would resonate with our readers here at BCStrategies.

With that in mind, my takeaways are a mixed bag. I found some of the messaging very strong, but others raised concerns, and here are my thoughts on each of these.

Where the messaging was strong

CTO Kevin Riley set the tone, stating how they’re the only vendor who can deliver an end-to-end portfolio for carriers, covering core, access and edge needs. Carrier networks aren’t my forte, but there’s no doubt that the combined capabilities of Genband, Sonus and Edgewater cover a lot of ground, both for public and private cloud environments.

From there, the vision gets broader, shifting from communications – namely VoIP and UC – to data analytics. They rightly see that there’s richer business value in the data behind these applications, which will help carriers in areas such as network orchestration, customer care and fraud detection. Kevin summed it up nicely by saying “I don’t want to be a plumber – with big data analytics, we’ll help you operate more efficiently and extract more value from your networks.”

John St. Armand, EVP of Analytics Business Strategy, took this a step further, noting that carriers are spending a lot of money on their networks, but not realizing the benefits. A big reason is silicon economics, where as cost curves keep falling and processing capacities keep expanding, end customer expectations get higher.

Not only do carriers need to provide more services at faster speeds and at lower prices, but all of this is giving rise to new data streams. This is where Big Data enters the picture, not just to optimize network performance, but to monetize new services for customers. These are all the right kinds of messages, and we heard some good validation from Geoff Moore of Bell. He talked about the need to “codify” their network management policies, and for that, he needs more automation – “everywhere” – including network surveillance, network recovery, traffic control, and DMS workflow.

Yes, you heard right – DMS. If any carrier is going to talk about what it’s like to still be using Nortel switches, there’s none better than Bell. Not only are these both Canadian companies, but of course, Bell is the progenitor of Nortel, going back to the days when telcos were monopolies with complete vertical integration. DMS may seem like a far cry from today’s more pressing challenges of digital transformation and adapting to AI, but there’s an important connection here. Bell was a great customer to showcase in terms of the huge gap between running networks with lots of legacy infrastructure, and the demands facing IT to have a high-performing network for today’s needs.

In this context, Ribbon’s focus on Big Data is spot on. Not only do their carrier customers need more than hardware or software to operate effectively, but they also need capabilities to make life easier for their end customers. To make that point, they had a speaker from one of their top federal government customers talk about how difficult adopting new technology is in large organizations.

The speaker was John Coyle, who is with DISA – Defense Information Systems Agency (part of the Department of Defense) – and he provided some head-scratching insights about how processes tied to legacy technologies make it so difficult, expensive and inefficient to do anything with their phone systems. This takes you back to the days of proprietary technology and vendor lock-in, which in DISA’s case is still very much a thing. Just like ordinary citizens, he explained that they get robocalls too, and from there, went on about how Ribbon’s capabilities helped them get to “nextgen enterprise voice.”

In DISA’s case, having the right technology partner makes all the difference, and this brings us to Kandy. The Big Data focus is clearly important both for helping IT better run their networks, but also to help carriers identify opportunities to monetize data based on end customer needs. Kandy is their vehicle for the latter, and Sacha Gera, SVP for Cloud Products, addressed their white label approach for both public and private cloud environments. The platform enables carriers to leverage APIs and WebRTC and open up their networks so they can be more innovative with new services, and more competitive against OTTs.

To drive that point home, Sacha made an important distinction as a wakeup call for carriers. He said that engineers from the legacy world think about innovation in terms of making things faster or cheaper. That’s important, but the developers driving innovation among OTTs are focused on making things better. Not only is that making them successful in today’s user-centric world, but they’re doing it on the backs of the incumbent’s networks. If that isn’t a call to action, I don’t know what else is.

Sacha summed this up in two simple words – programmable telecoms – and that’s exactly how carriers need to be thinking about voice services these days. Kandy has clearly been built around this idea, and it’s another way that Ribbon is trying to make carriers more successful. Overall, in terms of the messaging, I’d say Ribbon is touching on all the right things. They know the pain points facing carriers, and with their long pedigree in this space, they seem to have a solid portfolio to address them.

Where the messaging raised concerns

My main concern hasn’t changed from last year’s Perspectives – namely, can CPaaS really drive enough revenues to bring Ribbon back to profitability? I’m not optimistic, and that question was posed during a panel session. Rob Kurver of APIdays Conferences responded along those lines, saying that it’s not really about making money. Carriers need to focus more on retaining customers – so they don’t go to OTTs – and in his view, CPaaS offers a “gradual approach” to help them develop new services for this purpose.

As we’ve already seen, carriers don’t change very quickly, so this is going to take some time. When asked if carriers are late to the API game, Rob tactfully said “they’re waking up.” That’s probably good news for the OTTs, who are simply built differently and can move a lot faster to get in step with what end customers are buying.

In my view, CPaaS does provide a lifeline for incumbents, and we saw a good example of that with AT&T’s recently launched API Marketplace, which is powered by Kandy. That certainly seems like the right idea, but I just wonder if it will move the needle far enough and fast enough for Ribbon.

Further along that path, I’m also concerned about the competitive focus on OTTs being too narrow. When it comes to APIs, developers and CPaaS, Twilio is the biggest player, and given the ingredients needed for Kandy to be successful, they may be an even bigger form of competition. There was some talk throughout Perspectives about Kandy’s ability to support contact centers – a core focus for Twilio - but it seems pretty secondary to the CPaaS and UCaaS opportunities they’re addressing with carriers.

Rob Kurver touched on this as well, saying that the disruptors like Twilio, Slack and Zoom are just as important to monitor as OTTs. What makes them disruptive is how quickly they move – “speed is everything” – and that message resonates with me as much as investing in the right technology. Time-to-market rules, and no matter how great the Kandy platform is, carriers won’t defend their bases unless they get these new apps out to end customers fast.

With all that said, the vibe of any event is a good indication as to where a company is at on the momentum meter. Having just come from Slack’s event, I know what the vibe of 11 on a 10-point scale feels like. I’m not going to put a number on Ribbon’s event, but it was on a smaller scale size-wise, both in terms of attendees and the partner showcase. There were no major announcements during the event, and their CEO, Fritz Hobbs, had very little to say.

We did hear good things about customer success stories and the overall portfolio, but not so much about financial performance. The numbers aren’t great, and hopefully as the Sonus and Edgewater moves are fully digested, they’ll improve. So, it’s not surprising  that their Q1 results were released just after Perspectives. I’ve been through the full annual report, and am not seeing any specific revenue attribution to Kandy, so it’s really hard to say what it’s contributing to the top line.

As such, it’s a mixed bag for me. Before Kandy, Genband used to break out the numbers by lines of business, and it was easy to see where things were going. That’s not the case now, and given the strong emphasis on Kandy, I can’t say for sure where the payoff is going to be. Carriers certainly like Ribbon because they know carrier networks and they know how to provide end-to-end voice, but Big Data and programmable telecoms are relatively new on the scene, so there’s less certainty here.

I’m totally with Kevin about getting beyond their traditional “plumber” role and into the world of value-added applications. However, I think that puts them more into Twilio’s orbit than OTTs, and I’m not sure they’re built for that. Maybe they are – or will be – but it’s not staring me in the face.

Finally, I’m not alone in wondering whether Kandy should be spun out as a separate business, and if the financials don’t improve soon, there may be some urgency to do that. I do like the way they talked about Kandy being a start-up inside Ribbon, and when staff go to work on that team they’re going to “the pink side,” but we don’t know yet if this is the little engine that could. I wish I could reach a more definitive conclusion, but wearing my BC Expert hat, there’s a lot on both sides of the ledger, and we’ll just have to see how things unfold over the rest of 2019.

A Taste of Kandy at Ribbon Perspectives

Ribbon Communications hosted its service provider and carrier customers, as well as a group of analysts in the nation’s capitol recently, to provide an update about the company’s products and...