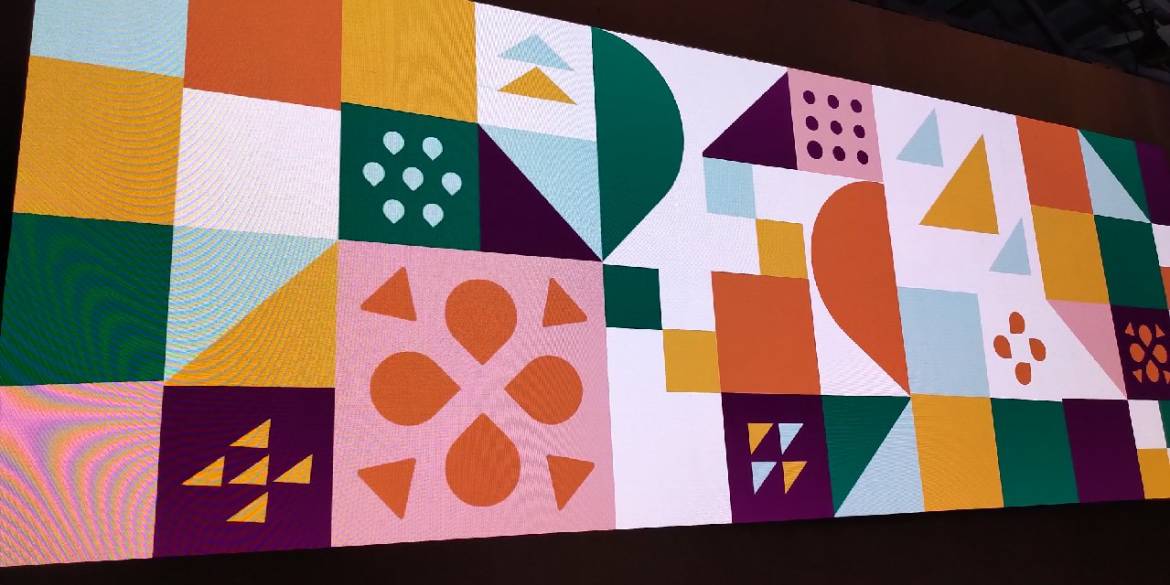 Slack Frontiers – Got Their Mojo Workin’

Last week’s Slack Frontiers had impeccable timing, aspirational messaging, creative imagery and a sense of purpose that turns casual users into cheerleaders. That’s a pretty rich buildup – and all of it is true – but there’s a bigger question that now must be asked: will the market buy it?

Let’s talk about the timing thing. As a prelude to this post, I worked hard and fast to share a gallery of photos from the event on my blog last Friday before my flight home. There was so much to talk about that I needed some time to process my thoughts, which will now follow below. I figured that my blog post – Every Picture Tells a Story – would keep the vibe of the moment going until now, but you probably missed it for good reason.

We got enough hints at the event there was some big news coming, and it dropped Friday morning. By now, any Slack follower would know that the much-anticipated news of their IPO was announced then, and that pretty much eclipsed any other noise going on around Slack. Of course, I think my photos are far more interesting, but I’ll leave that for you to decide. So, while I thought my blog post timing was pretty good, their timing was even better, and perhaps after reading this post, you’ll want to circle back to my photos – they haven’t gone anywhere.

So, before I can write about the takeaways I was planning on prior to Friday, a few quick comments on the IPO news. At this point, the basic details should be familiar – but if not, their last FYE revenue was around $400 million, up 80% from the prior year. While the company reported an operating loss of $154 million – yeow – gross profit was $349 million. This means Slack is coming in at around 85% for margin, and while software margins are generally high, this is really high, so they must be doing something right.

With staff at around 1,500, it’s no wonder they’re losing money. If I recall, they were at around 1,000 employees at the last Frontiers, and that was only around seven months ago. They are certainly in hyper-growth mode, where many of the heavy expenditures are front-loaded, and if you can hang on long enough to ramp up revenues, chances are good you’ll survive or even be acquired.

On the plus side, they have a critical mass of paying customers – over 88,000 – and they report that 575 of them are $100,000+ per year customers. This is an important proof point, since they need Enterprise Grid to drive the major revenues that sustain healthy growth and keep investors happy. On the other hand, this relatively small number of big customers accounts for 40% of revenues, so there is considerable risk at play if these deployments somehow fall short.

There is also risk to consider in terms of ownership, where the top two investors hold 37% of the company, led by Accel at 24%. By contrast, CEO/co-founder Stewart Butterfield only holds 8.6%, and with $1.2 billion of investment to date, patience could wear thin if growth falters. Margins may be high, but customer acquisition is the name of the game, especially the paid variety. There is inherent risk with all freemium models, and Slack is being careful in telling us just how effectively they’re converting free users into paid users.

Again, on the plus side, they have money in the bank – close to $1B – so this IPO isn’t about raising money. This is why they’re pursuing a direct listing, which tends to give early investors more liquidity and minimizes dilution by making shares broadly available. Their listing will be hot on the heels of Zoom’s IPO, which has gotten a lot of attention. Not only may this be sign of the market’s appetite to tech IPOs – which bodes well for Slack – but the two companies announced a formal partnership at Frontiers, and who knows whether there’s a bigger story at play here.

I’ve got enough material for a series of posts, but am only doing one here, so will just home in on one big idea beyond the above IPO thoughts. There were many memorable talking points from Frontiers, but this one from Stewart during the analyst briefing session really set the tone for me:

Now you may take that as being presumptuous, with some heavy-handed Silicon Valley we-know-what’s-best-for-you thinking. Perhaps, but it also speaks to the challenge of selling a new idea, and it should be familiar ground to anyone in the collaboration space. No worker has ever asked for UC, and vendors struggle to articulate it in a way that end users can relate to. Of course, since the industry has been on this track relentlessly for years, the idea has eventually sunk in, but it’s never been a bottom-up thing.

Generally, we know a good thing when we see it, and Slack is a good thing – as is UC – so the trick is getting us to have that “aha” moment. Since UC has laid much of the groundwork for collaboration, and Slack really is a different but related type of solution, the fundamental challenge has been finding the right reference point so workers can see what they’re missing. I’ve written before about how Slack is a bottom-up solution that came about precisely due to UC’s shortcomings, but getting the rest of the world to see that will be the key to their success.

Well, with over 10 million “active daily users,” a lot of people are seeing that, and there’s no denying Slack’s fantastic organic growth. Of course, being free has something to do with that, but we also heard how sticky Slack is and how loyal users are once they experience it. That’s the mojo I’m talking about, and we heard similar things at the last Frontiers event.

It’s a bit like getting hooked on Starbucks, and once that happens, there’s no going back. That’s how it seems to be for a lot of Slack users – calling them Slackers is probably a misnomer, but it’s tempting – the platform allows them to work the way they want to work with the tools they want to use. This doesn’t really sound like a tall order, but clearly it is, mainly due to the limitations of the legacy tools we’ve relied on for so long.

Email is the main culprit here, and while it’s indispensable for many things, it really doesn’t fit that well in the Slack-o-verse. Initially, Slack worked around email entirely, but they realized it can’t be ignored, and we heard a lot at Frontiers about how they’ve built bridges to email, but it’s still outside the moat. At one point, Stewart noted that most workers start their day in email, and the behavior change he wants to see will be having them start their day instead on Slack.

That seems logical since Slack integrates almost all the tools workers use in one place, and while it’s pretty much the norm for digital natives, older workers are still attached to email and telephony. In time, that will pass, but so long as digital immigrants are working, Slack has an uphill battle to face.

In that regard, email is the primary competitor to Slack. You may not agree, but that’s how they see it. During Frontiers, there was barely a peep about Cisco, Avaya, Mitel or Google in terms of UC or collaboration offerings. Microsoft Teams is really the biggest vendor they’re up against, and it’s certainly validated by the fact that MSFT pivoted big time away from S4B to Teams so they could be more like Slack.  We sure live in interesting times.

Aside from this being a clever anagram – and that’s all I’m going to say about it – this is a clever segue to the title of this post – which is yet another clever segue to my photo gallery post, so to connect all the dots, you’ll just have to go there after all. 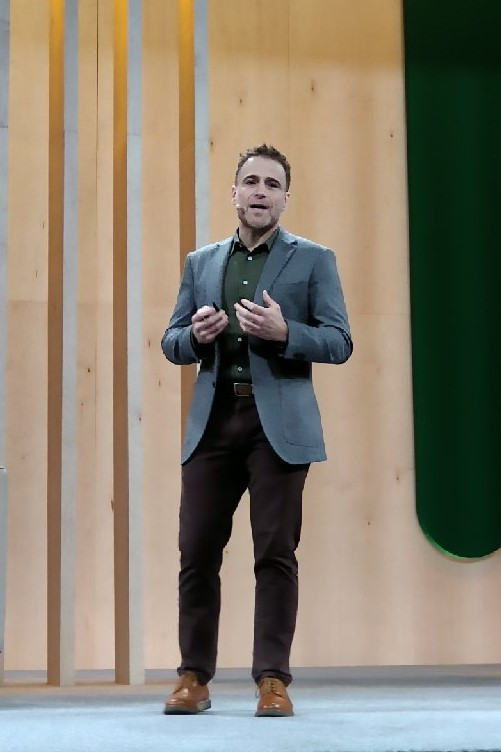 In short, this man has got the mojo right now, and I think it’s working pretty well for Slack. They may not be profitable yet, but that’s how it goes for these fast-growing disruptors. In a way, they have what money can’t buy. The vibe at Frontiers was pretty telling – this is a young crowd, a smart crowd, and a hip crowd. For this audience, Slack is cool, and the UC majors I mentioned earlier are not. Doesn’t really matter how good their offerings are – Slack is of their world, and with all the strong messaging at Frontiers about inclusivity and social justice – and it was very striking – this is the kind of company they want to support.

That can be a winning combination, but it could also just be a rush of wishful thinking. Investors want their payday, and you don’t go IPO to make the world a better place. If Stewart was the majority shareholder, it would be a different story, and he could run the company as he sees fit. So, if the vibe at Frontiers truly carries over to enterprise buyers and decision-makers, Slack’s mojo will keep on rising. Having loads of happy freemium users is one thing, but getting enterprises to spend major dollars with Slack is something else altogether.

As such, the risk factors mentioned earlier are real, and if the vibe doesn’t carry over sufficiently to buyers, financial pressures may dictate other courses of action, in which case all bets are off. I think IPOs like Uber and Lyft are doomed to fail, and if that’s the bucket investors put Slack in, I’d be worried. For now, though, I’m going with the mojo. They’ve done a lot of things right and a lot of the right things, and if the market catches up to them and catches on to this new way of working, that mojo will have a lot more rising to do.

My “Aha Moment” at Slack Frontiers

I finally understood why Slack wasn’t like other team collaboration companies.

A NICE Time in Wyoming