Turbocharging Teams focuses on tips and tricks to help you get the most out of using Microsoft Teams. In this first episode, we look at how you can share system audio if, for example, you want to show a video during a Teams meeting. Then we tackle some tips to help you master sending and formatting Teams messages. Scroll down the page to view the slides used in this presentation, and the transcript.

Welcome to turbocharging teams where we give you some quick tips and tricks to help you make better use of Microsoft Teams.

I'm Kevin Kieller and I'm joined by Dino Caputo and with that over to you, Dino.

Thanks Kevin. So today I'm going to be talking about sharing your system audio in a teams meeting. This is this is a feature that's been long awaited and I think one that a lot of people. Make great use up so effectively sharing your system audio in a teams meeting allows you to literally play sounds. That's coming out of your PC and share them in the from your computer to the meeting participants through teams so you can use it to play video clips or an audio clip. It's part of the presentation rate within a meeting, so this feature at this time is only available for Windows desktop clients. So. Hopefully will see in the near future. We'll see that come to Max and other devices, but for now it's limited to windows desktops. And you won't be able to include your computer audio while sharing a power point file or a whiteboard, but you could. You know, for example, play a video clip or go to a browser and play content from there. So how do we do all of this so effectively when you want to share system audio, you want to select the share screen button as indicated. In slide, in the slide their number one and then you'll see a popup where you can. You can decide what you want to share and you're going to include the option include system audio indicated by #2. And then you'll be effectively sharing your system audio. 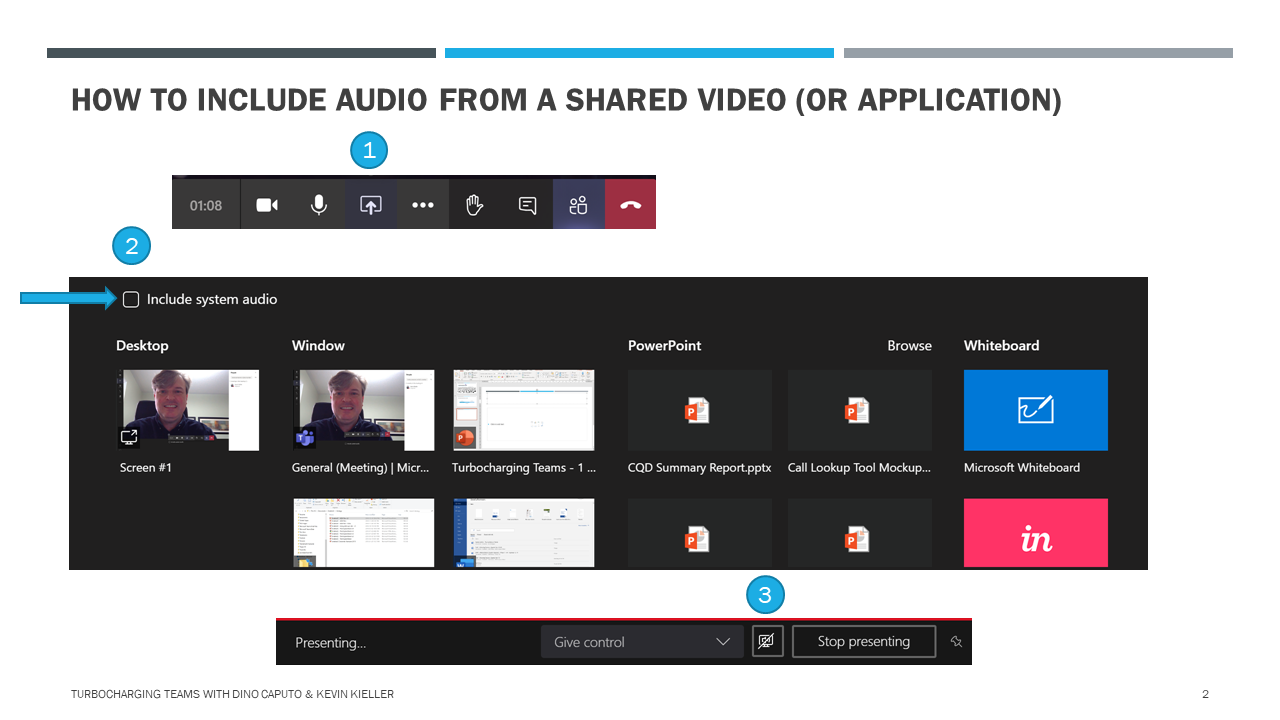 Now you have to make sure that you're playing your audio through your computer speakers when you do this. If you are using a headset like I am right now, you'll have to change it, otherwise it won't be able to share the audio. So just make sure. You can hear the audio coming out of your PC or your PC speakers, then you're good to go. And with that I'll pass it back to Kevin. I should actually mentioned before I do that. If you forget to. To share your system audio when you're sharing, you can see as indicated and #3 below. You'll see an indicator which has an icon for your system audio and you'll be able to click that or hover over it to see if you're sharing. If you're not, you can click it to enable system audio, and then Conversely turn it off. So, just in case you forgot to do that, that's also available. That's actually very new, so that nice nicely added feature, and with that I'll pass it over to Kevin.

Well, thanks, Dino. I am going to talk quickly about masterful messaging, so a key thing for the millions of people that are new to teams. Uh, number one. So if you have a message and you want to reply to it, you gotta make sure you type where number one is indicated in the reply box. I know that seems simple, but that whole threaded discussions and keeping track of stuff that, uh is important because a lot of people just. Type 'cause you know, maybe they used to Skype for business where there wasn't this kind of threaded discussion and they just reply. And if you type where #2 is, that's really a new conversation, so it's harder to keep track of. So that's quick. Tip number one. 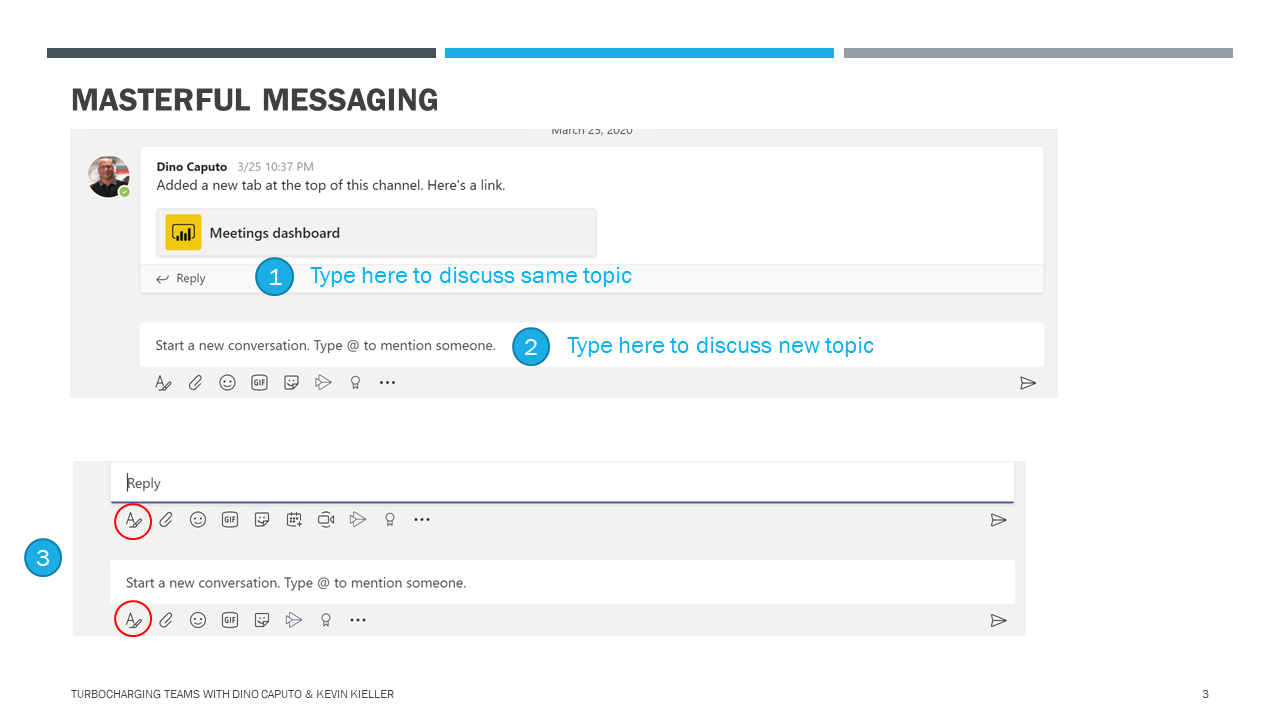 The second thing is is whether you're in the reply box or starting a new conversation. You got all these icons on the bottom, but the one on the left, which is the A with the little pen that I've circled in red by the number 3. That's kinda like the. Keys to the Kingdom because when you click on that. It opens this upper top menu and what I've done here on this screenshot is is to try to kind of put labels beside all these fancy dancy icons, some of which you will likely never use. Uh, but you know, some of them are standard, bold, italics, underline, strike out. He got this multi color highlighter font color font size. Although it's kind of in a you know you only get small, medium and large. Some paragraph styles, headings and regular. That little T with the XI mean. Click on that. That clears all the formatting so you can see the The Bunch of other things there on the far right. The trash can is the big oops. I thought again I didn't want to send this and I'm gonna delete it. But then on the bottom and and I've tried to highlight a few of them in blue because they're really important. So once again on the left is the show or hide did that Super Font Options menu. Add attachment paperclip should be familiar to most people and then you know the insert an emoji, a jiffy or a customized thicker. These are fantastic things for creating camaraderie at a distance you learn that your colleague is a big Star Wars fan or a Simpsons fan, or you learn a little bit about them. Now you can disable that in your when you set up a team. Uh, don't do that because that's how we express our. Individuality some new buttons have started to show up so schedule a channel meeting meet now uh, insert a stream video which is relatively new and relatively has somewhat useless. But anyway, have you got the praise button and then just because there's not enough there's like you click on the dot dot dot solypsis and you get more apps so you could for example, insert a pole or do other things on the far right.

Really key? I've seen this. So many, many times I've done this many, many times you put like let's say you put a file, you insert attachment and then you forget 'cause it uploads it. Then you forget to hit send. So the little paper I think of that as a paper airplane. I'm not sure what it is, but make sure you click on the send button or all your hard work with all the formatting will amount to nothing. 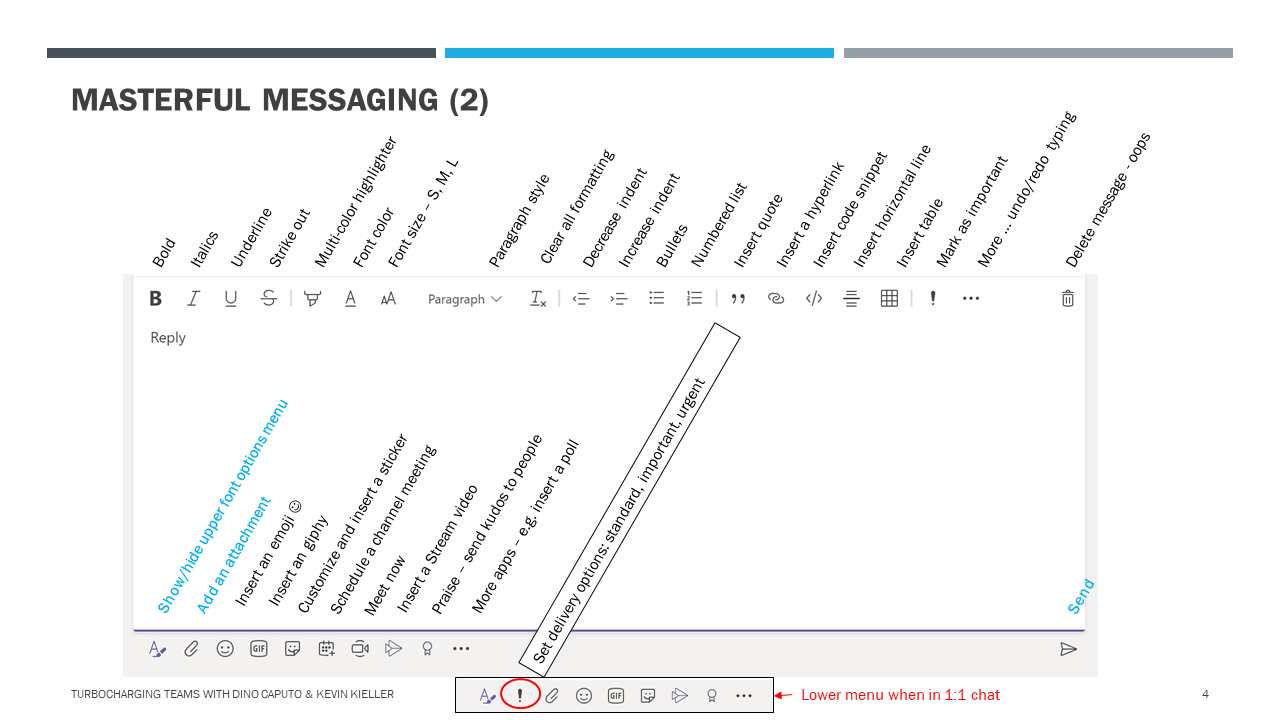 I do want to point out that yeah, if you're in at channel, message the little exclamation point is just mark as important and then a little. Goes up if you. However, in a one to one chat, the lower menu looks a little bit different. The exclamation mark is on the bottom and then it's really. It's a different same icon, different function. It let's You set delivery options. Standard important. None of those are particularly interesting, but urgent is great because then every two minutes for the next 20 minutes it pastors your colleague. If they don't respond, Microsoft. Loves to use that use case in like a healthcare setting where your paging a doctor but you know if I need Dino to do something urgently, that's that's the the the urgent icon is what I do. So with that there some quick tips to help turbocharge teams. And Dino I will turn it over to you to rap it up.

Well thanks for tuning into this turbocharging teams and please let us know by reaching out to either of us if you have a topic that you'd like us to cover. And provide any feedback and with that. Thanks very much and will talk to you next time.

In this episode of Turbocharging Teams, we talk about how you can keep up with new features in Teams and then show off a few new recent features.