Turbocharging Teams focuses on tips and tricks to help you get the most out of using Microsoft Teams. In this episode, we look at a number of new Teams features that can help make your meetings more engaging. Scroll down the page to view the slides used in this presentation.

Hello everyone and welcome to another episode of turbocharging

teams. My name is Dino Caputo and I'm here with Kevin Kieller.

And today we're going to be talking about some new features

that have just been released in.

Microsoft Teams. So traditionally when you were in a

view. If you had video enabled.

So what's been released is something called large Gallery,

which brings it up to 49 users

long time now, so this is great to see. The large large Gallery

into this video fatigue and

meeting fatigue. And not having, you know, just not feeling

together during this time of covid. Whenever ones working

from home. So the team went out and came up with this notion of

take everyone's video and superimpose it into an

auditorium. For example, why you're looking at here. So it

looks like you're all in the same room together. It's kind of

cool. I've participated in a few meetings now in this together

mode, and it's kind of neat and it just puts a new twist on to

room with the person. So those are two of the views that are

now available in teams they. 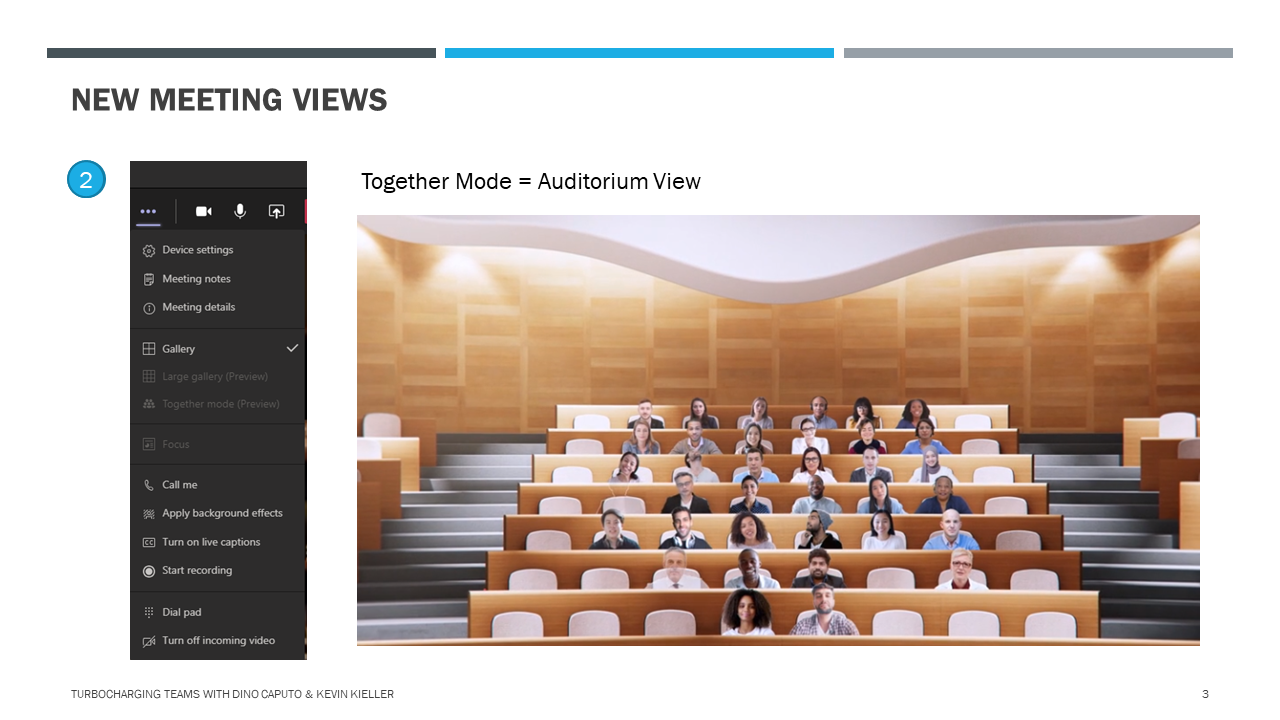 As you can see, are in still in previous you may not see these

options yet, but look for them in the ellipsis menu. You'll see

when you click on it you'll have. Gallery large Gallery and

talk about some of the other different views that you have.

Yeah well, thanks Dino and just before we get off together mode,

video fatigue and Microsoft actually you know they did brain

present it all the people on a common background like in

together mode that uh on the brain scan. I guess if you're in

a neurologist you understand how to read those, but basically

there was, there was less fatiguing, and the other cool

thing is, is they subtly altered the gaze of the people in the

room? To kind of move towards whoever the person speaking is

so you can come, you can kind of see who's speaking because

everybody else like they tilt the gaze of the other people. So

as you know some some subtle things, but uh, it it really 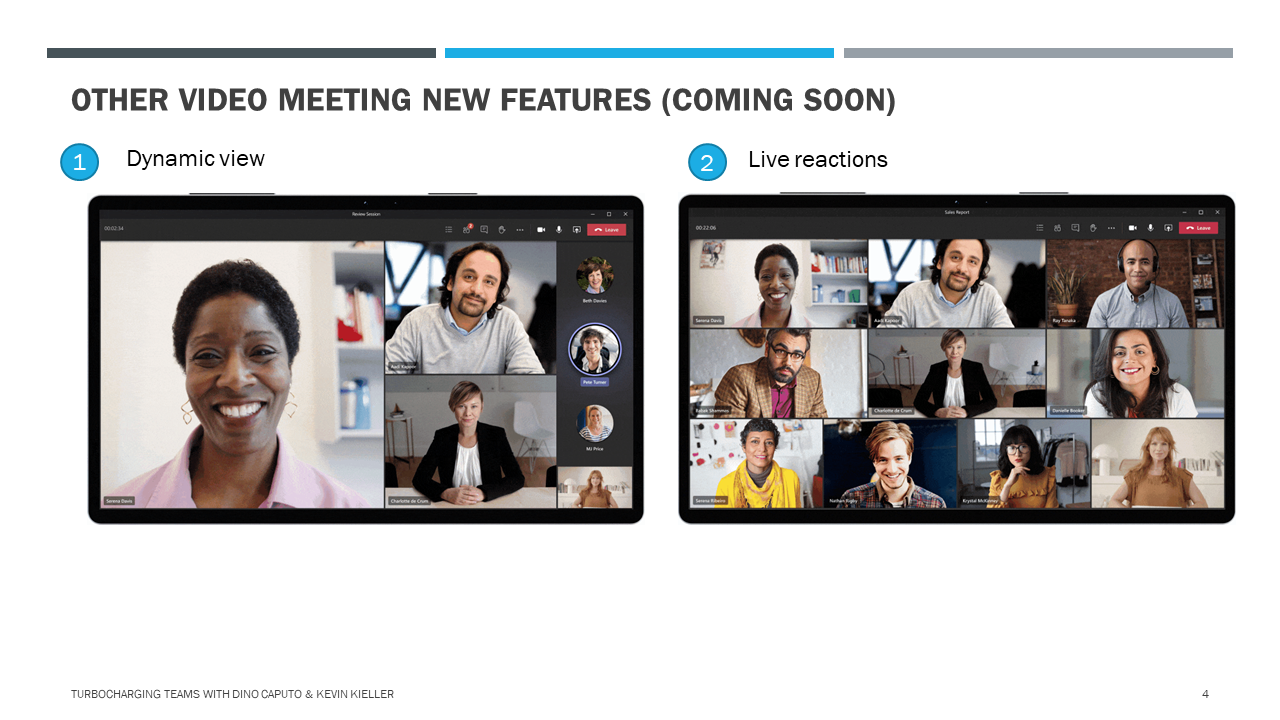 Yeah, there's there's other, um, those two are in preview, but

may be available in your tenant.. Um, the two things that I'm

going to talk about are coming soon. So, um, there certainly

not in any of the tenants that. I've had the opportunity to

participate in. I don't know what about you. Do you know I

have seen the dynamic OK view for sure? I've seen other

meetings with library actions, but dynamic view is available in

one of my tenants and.

different views for sure, right?. So so if we look at the dynamic

view and this is like an animated Jeff, that's put it

there. So it's kind of going through a fast, but the you'll

contents being presented and also you know depending on who's

turned on video. This is. Microsoft Teams doing a better

job of trying to figure out what you want to concentrate on so.

Uhm, you know if you look at it carefully, like people who

haven't turned on video, it keeps them kind of small and all

when content is being presented it, you know figures out and

shows the content big enough so that people can see it. So

that's kind of some. I don't know how artificial intelligence

anytime. Depending on number of

participants. See the other piece, uh, that showing on

number 2 is library actions. You can see you know little heart

emojis and different emojis. You know, uh, flying up so this just

gives you, uh, you know, if you're presenting, it just

allows in a non non obtrusive way for other participants to

kind of give you some feedback.

Another thing that I don't think it's exactly shown here, but I I

really think that this is an important thing is, you know,

once again a subtle thing. So the person speaking there's a

big purple box, uh, a purple frame around it, so it's it's

quite good when you have these bigger meetings and you're not

familiar with everybody or their voices, it's easier to figure

out who's speaking. Uhm, and then as well, one of the things

is not shown here, but they've also announced his.

Chat bubbles and the idea being that, UM, chat as opposed to

being on the meeting chat which is you know, kind of. Another

thing that you can open typically on the right hand side

that chat bubbles will appear on the actual person.

Video tile, so all of those things are coming soon, but I

think, uhm, you know the things that Dino showed and the things

Microsoft, you know, continues you know, week over week, month,

over month to just keep releasing, um, new features and

exciting because it's kind of like if there's a feature that

you don't find. You might wait a couple of months and.

You know, low and behold, you check the ellipsis menu and

concluding thoughts, Dino. Yeah, and I think these are really

of the you know the.

Versions of the emotions that you can show. So if you really

gives anytime you can give the speaker or presenters some more

feedback in the midst of the meeting. I think that that's

certainly helpful and this is just another step in helping

experience better. And with that. I will thank you for joining us.

And as always, there's the information you can send us

feedback, or if there's any topics you want us to drill down

on and that wraps up another episode of turbocharging teams.

Thank you very much.

In this episode of Turbocharging Teams, we talk about how you can keep up with new features in Teams and then show off a few new recent features.

Watch This Space Podcast: The Metaverse, Innovation and Invention - Thinking Bigger About Future of Work

CCaaS and UCaaS: Better Together?