Turbocharging Teams focuses on tips and tricks to help you get the most out of using Microsoft Teams. In this episode, we talk about how you can keep up with new features in Teams and then show off a few new recent features. Scroll down the page to view the slides used in this presentation.

Welcome to yet another episode of turbocharging teams. My name

episode, this time we are going to talk about a few new things

that are available in teams as of July of 2020.

Now the first thing I wanted to talk about is, well, how do you

keep up with what his new and it turns out that, uh, there's a

relatively easy way to do that, and so step number one, if you

navigate to the help icon, which is at the lower part of the menu

bar, your team's menu bar on the left hand side and click on the

help icon. Then you get kind of this menu. And if you pick what's

new. As shown, a number 2 then you get a list of new features

from the newest to the oldest.. 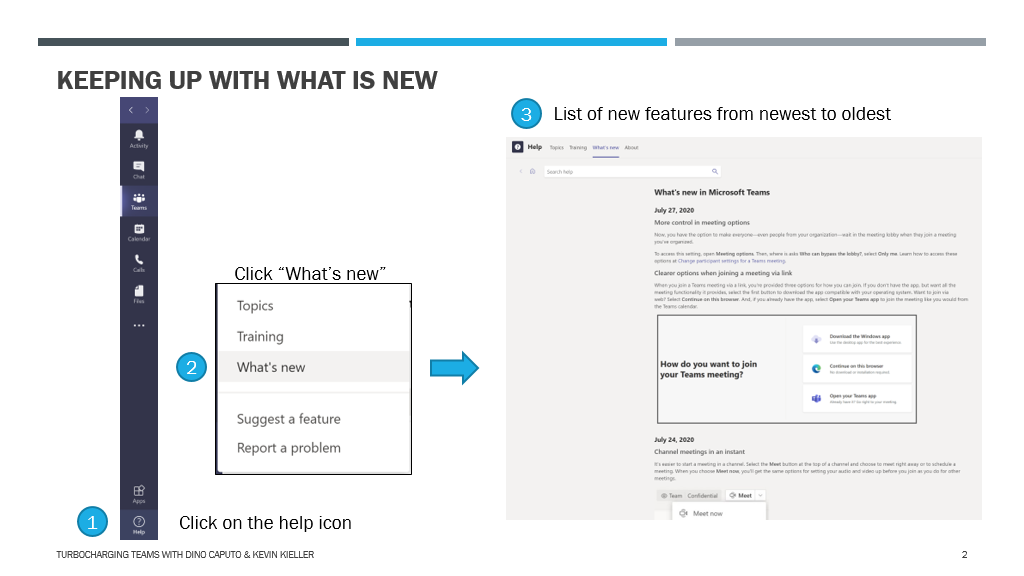 And then you can Scroll down?. Um, I'll take a look at a

specific example, but before I move on from this slide just on

that help, I come. Just want to point out on the menu shown in

videos. Uhm, and then if there's something that you think is

missing, you see there's a link to suggest a feature or report a

problem. So let's take a look at a specific example. So I 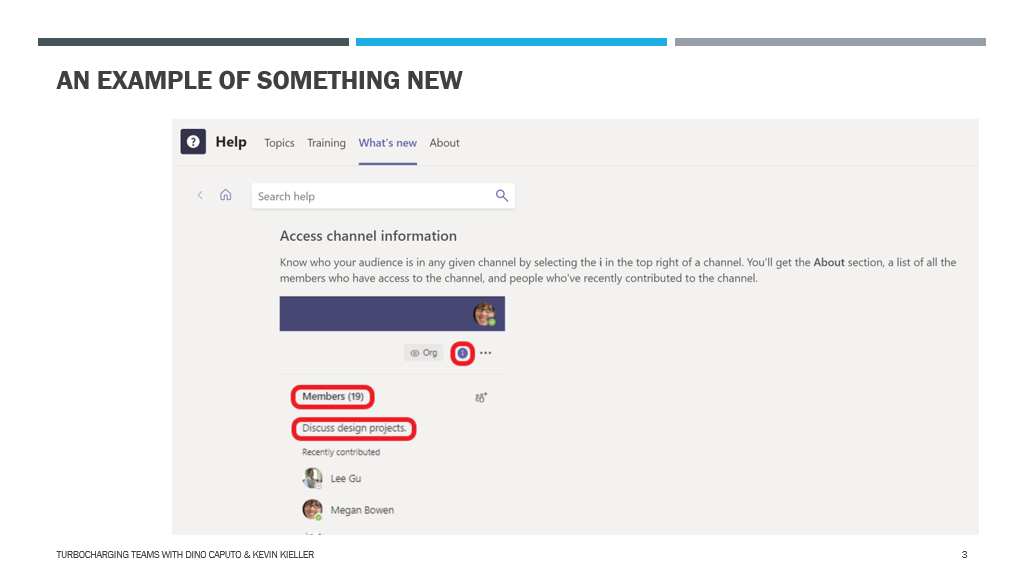 So let's try this out and see that it

actually works as described, and. I'll describe what it actually

does. So what I did is I navigated to our turbocharging

teams channel, and then as shown in item number one, there's a

little information. The. Universal High with the circle,

the information icon that showed up according to the what's new

as of July 24th. So I clicked on that and then you get this

additional information that pops out to the right of your channel

posts in this case.

And it displays a number of a good, you know, interesting

things for the channel, so um, at the top of channel

description, so that's whatever you've described as the channel

recent contributors, so it's good to see. Do you know that

both you and I are contributing to turbocharging teams? This is,

you know, I also did this, uh, for channels that had lots more

participants. And so I went into one that had like 1800 channel

members, which is the third section. And you know there was only four 5 recent contributors,

so I think in bigger channels that's very very useful. In this

case, you see channel members,. Dino, myself and I think for

testing purposes we added my my son, Logan. Uhm, so you can, you

know, just to prove that the recent contributors is, you

know, less than necessarily the channel members. If there's lots

see that, and then as well, there's like. Some synopsis of channel updates and quite

frankly, uhm. You know in this case you see like we

originally were going to call this series talking teams,

and then we called it. Now we change the name to

turbocharging teams so at some point Dino change the

name of that. But when I did use this, you know, Dino on

It showed up as channel updates.. It seemed pretty darn random, so

It's showed back in February.. One person joined the channel,

afterwards. So I'm not exactly sure. Uhm so you know, maybe we

contributors and channel members. That's totally clear.. Uhm, that is one of the new

features. Uh, that is available and it's it's pretty

over to you, Dino to talk about, uh, some other recent additions 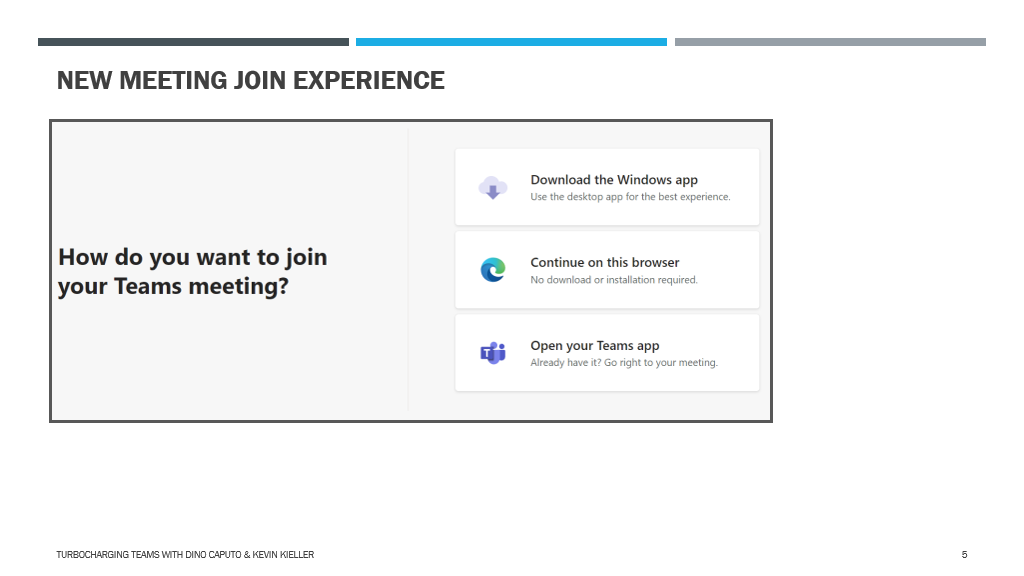 Great thanks Kevin. So. I'm going to just talk about a

couple of new features around

the. Meetings, and specifically the new meeting join experience

so previous to this, depending on the client you had, you might

get a different experience, but. I think Microsoft did a nice job

and a clear method of joining a meeting. So now when you click

on any meeting link. That's in outlook. You'll see a new meeting pop up that looks as

follows, so it'll say. How do you want to join this teams

meaning? So you'll have three options if you don't have the

participant that's never used teams before you know they can

they see the very first option to download the windows app, so

that's that's very nice. You can just click that option and

download teams right? From here you can say continue on this

browser is the next option, so you're already in a browser

window. Uhm, you? Why not just join the meeting from here? You

might not want to install the client for whatever reason.

So you can go ahead and do that.

Often I'm as a consultant, I'm in different tenants all the

time, so sometimes I'll have a browser window open to a

particular tenant. I might join it this way so it just allows

me to interact in multiple tenants. So this is a great

easy way for me to do that. And then Lastly, if you do have

teams and installed on your desktop, you can just go ahead

and click the third option.. It'll it'll go ahead and open

teams right on your desktop for you. So nice new welcome

feature in terms of making it easier to join a team's

Hey so I'm gonna ask a question. I know we didn't. We

a Mac, right? You know? I mean download Windows app would be

interesting. I don't know.. Have you had it? I don't. You

don't get it on a Mac. Yeah you don't get this experience.

OK, as far as I know that's true for many of the features.

That have come out recently, so,

um. Perhaps will have to do an episode on Mac specific, yeah?

Or maybe you use a Windows machine? I use a Mac and then we

different. So that's right. OK,. OK, well, so now I think you're

going to talk about another new feature. 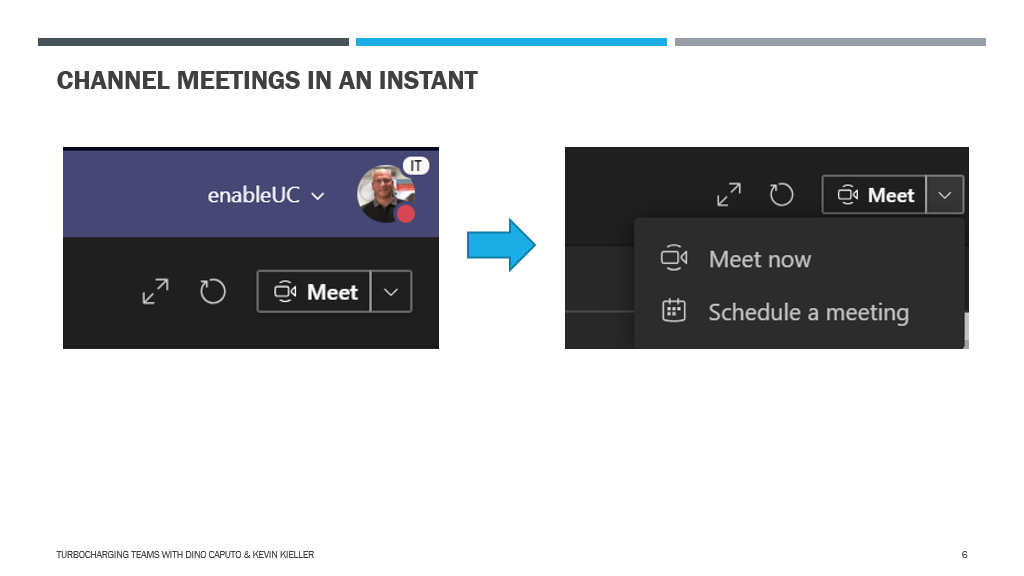 Yeah, we're going to be talking about channel meetings, so you can do two types of

meetings in teams. And the first is just a regular meeting that

you book in outlook, much like you would have been used to

doing in the past. But you can

perform teams. But then there's this notion of channel meetings

and we discussed them in the past, and those are meetings

that take place within a specific teams channel, and so

that would require you to be a member of that team. The content

of that meeting resides within the channel, so everything just

stays in one spot, which is really nice. So if you've got a

reoccuring meeting, you can schedule it in a channel so that

the contents discussed anything any notes taken. The recording

all gets saved in the channel.

feature it was really tricky to start one up. You had to like

underneath the bar you would type in messages into the

and you can see.

Just hide underneath your avatar when you're in a channel you

have the little meat dropdown

option. And selecting that you can just click meat or selecting

it has the meat now or schedule a meeting options so.

Uh, a lot easier, a lot cleaner and easier to find that option.

So um, that's it. So nice. New way to start a channel meeting

Sounds sounds good and I think this is what we're doing. We're

recordings in one place. That's right when we're done. This all

access it and everything is kept neat and tidy. So super.

you should really explore it.

And with that, thank you for joining another episode of

And, uh, joined, joined by my colleague Kevin Killer and will,

uh, talk to you next time. If you have any feedback, please

and give us your feedback.

Thanks a lot. Will see you next time.

In this episode of Turbocharging Teams, we look at a number of new Teams features that can help make your meetings more engaging.

Watch This Space Podcast: Looking Ahead for 2021, and Thinking Bigger with AI - Beating COVID-19